Before I moved to Beachville I’d been yoga-ing every week for a good few years.  I’m not sure if it was the actual yoga, my ridiculously patient teacher or some of the people in the class who became really good friends, but I’m convinced that one or a combination saved my sanity a number of times.

So when I moved, I was a little panicked about not having any of that,  but that lovely teacher knew some other teachers down here, so I started a drop in class the second week after moving.  It wasn’t the same.  I know things take some getting used to, but driving there was a nightmare (and there wasn’t an alternative), parking was worse (Beachville is permit happy and using a meter if you find a space takes time, patience and a phone connected to the interweb) and then the class was so crowded you could never stretch your arms out without getting overfriendly with the person next to you, and on two occasions there wasn’t room to lie down and extend legs.  It was not relaxing….

So I found another class.  It wasn’t quite as crowded, but I had the same issues getting there and in this one people breathed SO loudly (think When Harry met Sally) I had an unreasonable urge to bop them on the nose, and at least one person clearly didn’t believe in deodorant or washing their feet.  At one lesson I forgot I had my running watch on – which announces things to me when I’m running.  I knew that I wasn’t quite getting the relaxing experience I was aiming for when it informed the whole class that ‘heart rate is 85’.  I was lying down.

So I decided that it was daft to pay each week to go and lie in a crowded room and get stressed.  There had to be other options, right?  At the moment I don’t have room to do yoga inside the house, so I looked up mindfulness apps.  I found ‘Headspace’ which has ten free sessions.  I decided that Himself might also benefit from a bit of relaxation too, so last week we tried out the sessions as we went to bed.  Three minutes of meditation; what could go wrong?

The first night Himself fell asleep within two minutes of the session finishing.  I got a bit grumpy as we were part way through a conversation.  The second time, he was asleep in half the time.  I tried hard to be pleased for him as he reported the next morning that he’d ‘not slept so well in ages’ (while I’d lay listening to evidence of this for what felt like hours).  The next time he fell asleep 30 seconds into the meditation and I decided that this level of relaxation was not required by anyone every night and maybe once a week would be enough for him.

But it was ok, because this week he’s been away, so I’ve had the opportunity to do the sessions on my own without having to listen to his snores.  The first night I got SO cold part way through that I had to pause the meditation, go downstairs, reheat both hot water bottles and get back into bed.  It didn’t really work as I’d heated the hot water bottles so much I was pretty much cooking as I tried to get back into it.  The second night somehow my iPad fell on my head and my nose managed to hit the relatively small bit that allows you to fast forward.  Almost to the end. 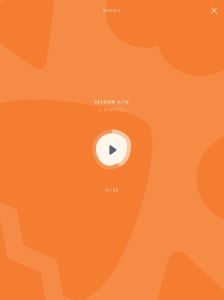 I’ve given up.  I’ve decided I wasn’t designed to be relaxed anyway.  I’m going to try to find another yoga class without parking issues, space issues, breathing issues or stinky issues.  There has to be one closer than Bumpkinsville, doesn’t there?! :o)