My mum make the best lasagne.  I mean The. Best. Capital letters and everything.

So it was second on the list of things she taught me when I was living there.  It was second mostly because of the cheese sauce.  Unbelievably, I made a perfect cheese sauce, first time.  More believably, when I recreated this last week, I used a total of 1.5 pints of milk because it just wouldn’t sauce up.  In the end I had to use another method (and go to the shop for more milk as that’s practically a weeks supply).

It was worth it though.  This is how Mummy W makes The Best Lasagne (again, I made notes exactly as Mum explained it to me): 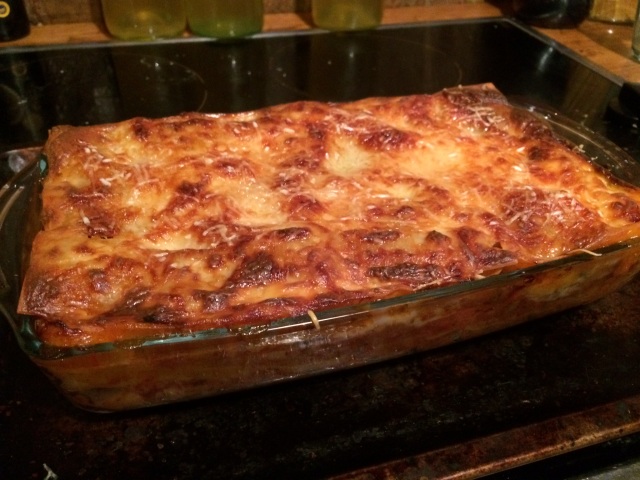 For 4 normal people (or one normal, one Himself having a hungry Monday and one large leftover piece):

Brown mince in pan (don’t need oil)
Dice up pepper, onion and mushroom to about 1cm or a bit smaller
Throw in pan and cook for a bit with the mince
Throw in tomatoes, rinse juice out with a bit of water
Add Worcester sauce, herbs, salt, pepper and turn down heat a bit
Add tomato purée depending on how much liquid there is. (Mum reckoned a desert spoon, but it was the most heaped desert spoon I’ve ever seen…)
Turn up totemperature and leave to do its thing for up to 45 minutes if you are following a proper book, 20 mins if you are MummyW.
Needs to have some juice (as lasagne will soak it up) but not too much

Sauce****:
Pop cornflower and mustard powder into measuring jug
Pour a bit of milk in and mix to a bit of a paste
Add milk to 1/2 pint
Pop in saucepan, heat and don’t forget to stir with a wooden spoon and scrape bottom of saucepan so you don’t get burnt bits
Bring to the boil for a few minutes to thicken
Take off the heat, and add cheese. Stir til melted (or put back on heat if it doesn’t)
Add pepper

***When it all went wrong the second time, I mixed the cornflour with some butter in the pan, then gradually added the milk and heated for a while til it thickened before adding the cheese and pepper.

Put thin layer of mince on the base so pasta doesn’t stick
Layer of pasta
Mince
Pasta
Bit of white sauce (plus mozzarella if you are feeling fancy)
Mince
Pasta
All the rest of the white sauce
Grated Parmesan on top (for unknown reasons, stops skin forming if not going straight in oven).

Pop in over for 45 minutes. Stand on a tray in case it all bubbles over….