The recognised link between cake and running

Himeslf is a runner.  I am a lolloper.  Before I moved to Beachville we talked about –  once he was all London marathoned out – getting me to a level where I could attempt a half marathon.

Weeellllll…talking and doing are a world apart and as we got closer to the doing (and I just mean the training rather than any actual race) I started to feel a bit panicked.  I finally admitted to myself and Himself that the idea of having to run so far was taking the enjoyment out of any running (and as most of the enjoyment is when I finish, there isn’t that much to take…).  I decided to just go back to running for the ‘fun’ of it.  And to allow me to eat vast quantities of chocolate and biscuits and cake.  Mostly the chocolate and biscuits and cake thing, if I’m honest.

Anyway, that was before we went on holiday and I suggested that Himself read a book some of my lovely running friends bought me when I moved.  It is a book of stories from a runner who doesn’t take herself seriously.  My plan was to help him appreciate running for the sake of running rather than to complete a marathon in a stupid time that requires months and months of training.  What actually happened was he discovered the 100 Marathon Club and decided he’d quite like to join that.  So that plan worked well then.

Somewhere a compromise was reached which means Himself will not be training every available hour and I wont be standing at the side of a race every other weekend carrying a bag of clean clothes and wet wipes (runners are, not surprisingly, VERY stinky after a marathon).  We are trying out this compromise next month when Himself will be running a relaxed marathon and at the same time, in the same place, I may or may not manage a half marathon, but neither of us will be taking things too seriously, because we are signed up for:

It’s genius:  ‘The loop we have developed for this event will be about 4.37 miles, so each loop will burn up around 500 calories. A modest sized bit of cake we are thinking per lap! The event will have an eight hour time limit for you to run as many, or as few laps as you wish.’

If I make three loops, that’s great, but if I don’t it really wont matter.  Himself can go for a full marathon number of loops, and hopefully get to enjoy it a bit more than his previous big runs.  We’ll probably finish at the same time…  And we both get cake on every lap we do.  And the training for this one?  Well, it will mostly involve cake, I think :o)

(There are still spaces if this appeals to you.  There are heaps of others they organise too.  For the record, I’m nothing to do with the organisation – just quite excited about the direct link between cake and running :o) ) 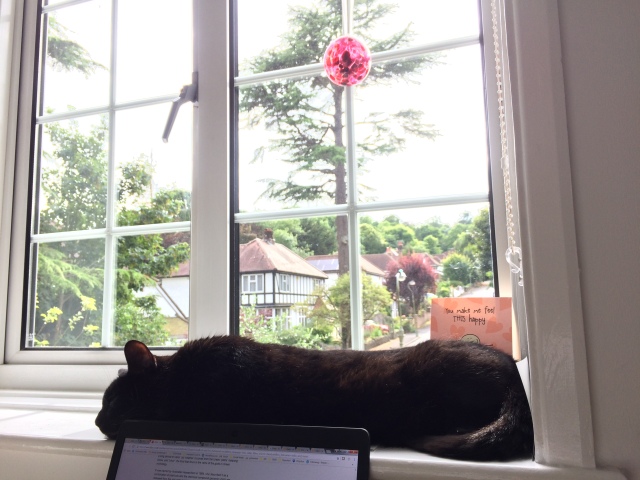 Norman is not terribly taken with the whole idea…

erm...
View all posts by thepogblog →
This entry was posted in exercise, fitness, food, Good for you, Realtionships, running and tagged cake, half marathon, Himself, running, saxons, vikings and normans. Bookmark the permalink.

3 Responses to The recognised link between cake and running