Posted on November 8, 2013 by thepogblog

One of my friends at work asked for my advice recently.  She was going from hair to wig (for very different reasons to me) and was worried about getting a cold head in bed.  I don’t know if bald men have this issue, but I do know that when you go suddenly to no hair, bed time is rather nippy.  She’d looked for a hat but couldn’t find anything that was thin enough and wondered what I’d done.  I had made myself one, so I offered to do the same for her:

But it looked a bit boring, so I made a pretty hat for out of bed:

Then I thought she might need a smile or two, so I made these for her: 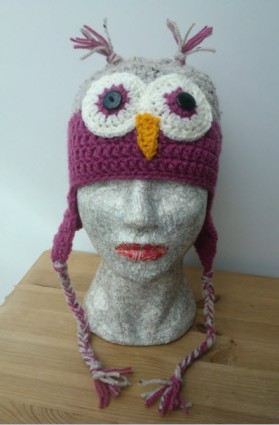 Her wig is beautiful, by the way, and knowing that I named mine, she decided to do the same.  Hers is Gwyneth :o)

I thought maybe I could sell some of these hats for charity in my office and as my facebook friends will know, yesterday I checked with the head of facilities for our office to make sure it was ok.  I assumed that, as we have cake stalls for charity all the time in the office, I would get a ‘yes, no problem’.  I didn’t.  I got a ‘We would need to check that the item is appropriate, then we will need to inspect the items to check the quality, then we will need clearance from the Legal team as it could be seen that you are running a side business in work hours’. I wasn’t impressed.

But it just so happens that I had a meeting with some of the Legal team later in the day, so I asked them if they could see an issue with what I wanted to do.  They nearly fell off their chairs laughing (at the red tape, not me!).  They took me to meet the Legal lady who Facilities would be talking to.  It turns out that she is a crochet-er and was more interested in pictures of the hats and where I got the patterns than anything else.  Then she suggested that rather than jump through hoops, I just e-mail work friends to let them know what I was doing (as she said, ‘there’s nothing stopping them from mailing their friends’) and have an unofficial stall under my desk.

So I shall be starting a black market crochet hat stall in the next few weeks.  Hopefully I can raise some pennies for Crisis – a charity that help homeless people with all sorts of practical things including healthcare, education and housing.  At Christmas they open centres in three UK cities so that people can get a bit more support through services that volunteers offer, hot food and a few warm night’s sleep. I kind of hope that the Facilities person finds out, and that see that there is a difference between the important rules and the petty ones that stifle people.  But then again, maybe it’ll be safer if they don’t.  In fact, I may invest in a black market disguise – dark glasses, a mustache and a dinosaur hat, perhaps :o)

For crochet people, here is the Pattern for Owl and the Pattern for Dinosaur.  Both of these pattern writers are rather talented bods!  For the other two hats I used the start of the owl pattern and then increased and reduced to change the shape a bit and finished with a few rows of doubles to make a band.

8 Responses to Crochet hats and a potential black market