The Dress of Daftness

Last Friday I took half a day’s leave.  I spent it sitting in my parent’s cellar with my Mum.  I was sewing a dress and Mum was helping me (there were pleats, darts and bias binding involved.  There was no way I was going to attempt it alone).

We had a few problems and I won’t bore you with the details, but I can only assume that I managed to stitch in some daftness.  I finished the dress on Sunday afternoon and I was rather proud that I could wear my creation to work yesterday.

It started ok, but went downhill at my first meeting.  10 minutes after the meeting was due to start, the people it was with hadn’t bothered to turn up and I was not happy.  They needed me to advise them and they were making me wait?  I don’t think so.  I gave them a few more minutes then thought to check the invite, just to make sure they had accepted it before I sent them a short sharp mail subtly indicating my displeasure.  One look at the invite and I realised I was in the right room but on the wrong floor.  Luckily, they were very lovely, patient people who were very kind when I explain my stupidity.  To thank them for their kindness, as I attempted a hand shake at the end of the meeting while holding too many things, I managed to pour the dregs of my coffee over one the hand of one of them.

We have to wear passes at work to get in and out of the building.  Once inside, the only time you need your pass is to get out of the stairwell.  My dress of daftness only had one place (a tie type of thing at the side) where I could clip my pass and to be honest, I wasn’t sure of the quality of my stitching in that area so I decided to leave my pass on my desk rather than risk an unravelling situation.  Of course, I forgot this when I rushed up one flight of stairs to talk to the same person I’d poured coffee over an hour later.  Yes, I was stuck in the stairwell.  With no phone.  And the stairs aren’t used very often so there was little chance of someone passing me and letting me out.  I had to hammer on the door for a good five minutes.  And explain to the poor bloke that I was late again because I’d been stupid again.

And it didn’t stop there.  Yesterday was very windy outside my office.  I was getting over the above issues with a quick cigarette, feeling really proud of myself that for the first time in years I didn’t have to worry if my usual gallon of hairspray would hold my comb over in place or that my wig might fly off.  No, I had lots of real hair like most of the population.  Unfortunately, with little experience of said real hair, I didn’t think what wind could do to it.  I walked back into the office, queued for the lift with a lot of other people, went to my floor and then caught my reflection in a glass wall.  My hair had blown almost entirely on end, and courtesy of the gunky stuff I tame it with, it had stayed there.  I looked like I’d stuck my fingers in a plug socket.

But that was it.  The rest of the day was ok.  I thought I’d write a blog post on this so when I got home I decided to take a picture of my dress to illustrate it.  Only Sister 2 is away so I had to do a selfie.  I’ll post some below as I think they’ll give you a smile without even having the story.  I was aiming for one picture that made The Dress of Daftness look ok.  I failed.  They kind of sum up the rest of the day. :o)

oh, don’t be an idiot 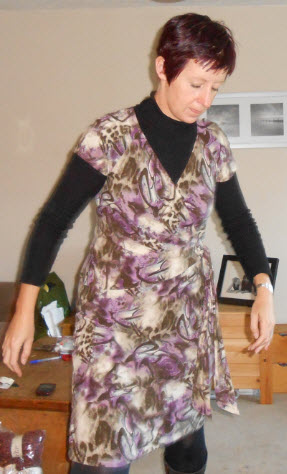 well, at least you can’t see the wrinkles. Or much else 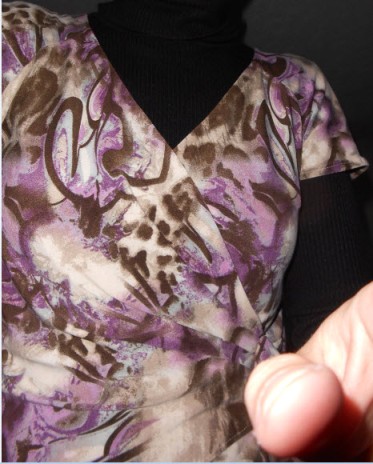 A bit of a muddle with the timer. Look at those pleats though!

I actually forgot to move in front of the camera 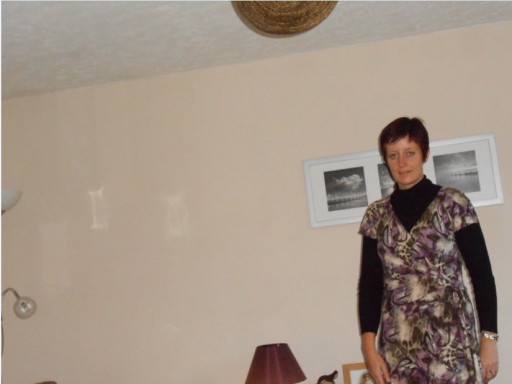 You can see I was bored by this point. And I’d forgotten to breathe in. And I didn’t know what to do with my left arm. But sod it, this will do. This is The Dress of Daftness!