Tuesday was the first day of term for my yoga class and it was like starting big school again.  We were in a new, bigger building, with people who were almost all new to me.  Added to that, courtesy of Gorgeous Godson’s lovely mum, I had my own yoga mat.  No more borrowing from teacher.  (The equivalent of borrowing PE kit from the lost property box, a practice which seems so wrong now.  Actually, it felt wrong at the time too.  Bleugh.)

So anyway, I went into the shiny new room with the shiny new people and unrolled my shiny new yoga mat.  Then a man came in – an older, portly gentleman with a rather tight tshirt.  We will call him Mr Feet.  I turned away for one minute, turned back and Mr Feet was STANDING ON MY MAT.  My nice, shiny, purple mat.

I don’t like feet.  I hate them.  I will not go near anyones feet, ever.  And Mr Feet had hairy ones with gnarly nails.  And they were on my mat.  He didn’t even move when I tried to subtly shift the mat.  I decided (possibly a little unfairly) that I didn’t like him.  When he eventually removed himself and put his mat next to mine, I turned mine over – you didn’t think I’d put myself where his feet had been did you? – and the class started.  In yoga you breathe in and out through your nose.  I can only assume Mr Feet had a cold as he sounded snorty.  For an hour and a half.

And then….at the bit at the end where you lay down and relax – my favourite part, he obviously relaxed a lot.  Because he started snoring!  Grrrrrr.  I think I was more stressed by the time I finished the class than I was beforehand.

Next week I will be very careful where I position myself.  And it will be nowhere near Mr Feet :o) 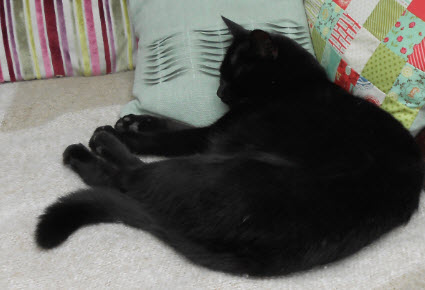 I really need to learn how to relax at the speed Norman can manage it.

erm...
View all posts by thepogblog →
This entry was posted in yoga and tagged gorgeous godson, Mr Feet, relaxation, yoga. Bookmark the permalink.