My neighbours can be a bit of a challenge.  No, that is work language (see how they have trained me?!).  My neighbours are a nightmare.  And the problem is, I’m slightly scared of them and their very large extended family who seem to stay for days on end.  I can just about cope with the fact that at least one night a week the kids are still up and running around past midnight and I have to go to work on four hours sleep.  The arguments outside my front door are sometimes better than the TV I can’t hear over them.  And I can only assume they don’t realise that the bass on their stereo creeps up all on its own until my walls feel like they are vibrating and I snap.  I do snap occasionally, you see, but I try to pick my battles as I’m pretty sure if I complain too much they will just up the ante.

But when, on the third day running, I realised that one of the kids had picked the tulips I spent ages planting back when it was bulb season, even after the talk we had last year when she did the same with all my daffodils, and again, three days earlier, and knowing that both of her parents had heard the most recent conversation, I lost all sense of perspective.

I posted on Facebook to ask friends if they had any ideas of how to address this other than a 6 foot fence that was becoming very tempting.  I had all sorts of suggestions from stories about flower fairies to a rabbit fencing / car battery combination (you know who you are!).  They were all brilliant, but most people suggested that I plant some flowers with the kids to teach them about growing.

So, on Saturday, I trundled off to Homebase and bought two pots, some sunflower seeds, compost, a small watering can and some flowering pansies.  I’d already asked if I could borrow the kids and they were waiting for me when I got back.  We sat in the front garden and I told them how plants need food (compost) and water, just like us.  We smashed up an old pot to make crocks, added the compost, did lots of stirring, lots of watering and then we planted the seeds and started our sunflower competition.  I told them how they would need to water them everyday and that the watering can was for them, so they could do that on their own.

It looks a bit dramatic, but had to blur their faces for obvious reasons. This is them with their sunflower pots….the little girl is in front of hers

Next, we planted the pansies in another pot and I said if they wanted to pick flowers, they could pick these ones as these belonged to them (NOT the ones that belonged to me and were in my garden!).  We discussed how pretty they looked and how if they picked them all there wouldn’t be anything pretty left to look at.  We also had to learn about roots as they wanted to ‘take those bits off’ before we planted them, and about how they had to be very, very gentle with plants (which of course resulted in very over-exaggerated carefulness that made me want to giggle). 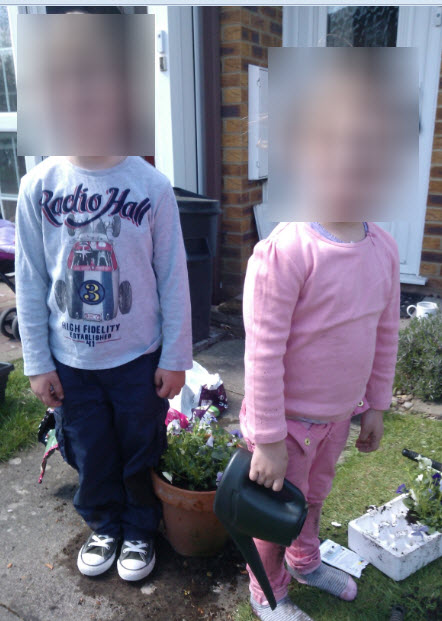 Pansies and watering can

The little girl got filthy (I had warned their mum!) and both were slightly stressed about dirt on their hands, but they smiled and asked questions all the time,and wanted me to take their photos to show what we had done.  They both had a bit of a melt down when we finished, which I took as a really weird compliment….

And in return (after sneakily planting some left over seeds in my back garden so if theirs don’t shoot, I can do a bit of midnight transferring), I got the biggest treat.  It turned out they were going out (their Dad sat watching from the car most of the time we were planting, so I should have guessed), so I got to spend an hour in my back garden in absolute peace, crocheting next to the bush I don’t know the name of, but has flowers that smell delicious. 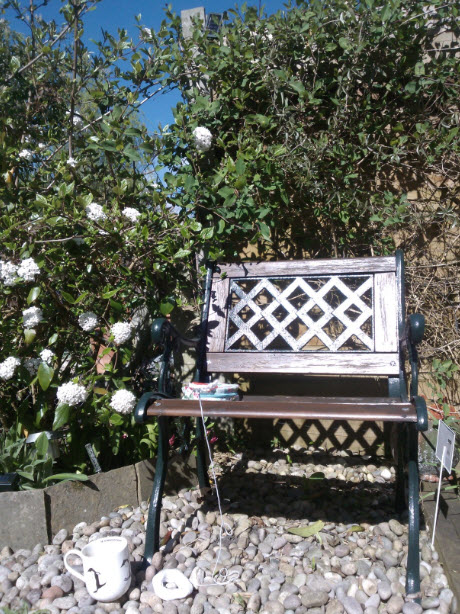 I have no idea if this plan will work, but 3 days later, all my flowers are still intact, so I can hope.

And in other news, I made some of the most unsuccessful Viennese Fingers possibly ever made (although they did taste ok):

And did a spot of more successful shortbread making for this month’s Secret Baker Effort:

4 Responses to Training the neighbours…