Some of you will know that my Mum recently had a big operation – hence the lack of blog posts – it’s been a rather busy time.  My whole family are now very smiley that after almost every complication going, she’s finally home! :o) (Strangely, minus her tummy button which was either removed with other nasties, or has been sewn into her scar in an accidental kind of tummy tuck…).

While she was I hospital Dad went to sit with her every day.  Sister 1 provided light entertainment for her by taking Little Pea to visit (who apparently rather liked wearing sick bowls as a hat).  Sister 2 went down every morning to bed bath, and later shower, and dress Mum.  I love that my family all did their own bit and had their own role.  Sister 1 and Sister: you were both amazing.

This is not Mummy. This is Penny Gwen, who stole her bed for a short while.

I didn’t really have a role, other than ‘evening visitor’.  I would hurtle down to the hospital after work, moan about the traffic and try very hard to think of scintillating conversation.  I’m not very good at that, so I just went into making mode.  Big time.  I did making at the hospital, I did making when I couldn’t sleep.  I did making to distract myself from worrying.  I even read crochet patterns in bed.

Before Mum went into hospital, Sisters 1 and 2 decided to have a tattoo of an anemone done for her.  I’m not into body art like they are but Sister 1 asked if I’d like to join them.

Me:  How much will it hurt?

Sister 1:  Like a thousand wasps are stinging you.  And having a good scratch at the same time.

I decided to do my own version and made some anemone like flowers and made this for Mum instead: 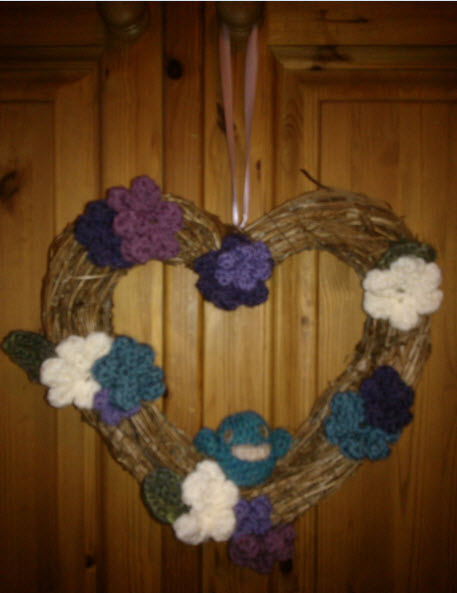 I attempted sausage rolls.  Mum makes them for Dad and I thought he might run out of homemade ones when we realised Mum would be in a lot longer than expected.  I followed the instructions Mum had given me before, but somehow it went wrong.  I made the BIGGEST sausage rolls ever.  It turned out these were enough for 5 meals…

I made Sister 2 a hat she had requested for dog walking.  And I finished a caplet thingy for myself:

And then a friend posted a picture of a light up rug on Facebook and I had a go at that too (Norman was not keen and decided it needed killing.  Little Pea now owns the rug….): 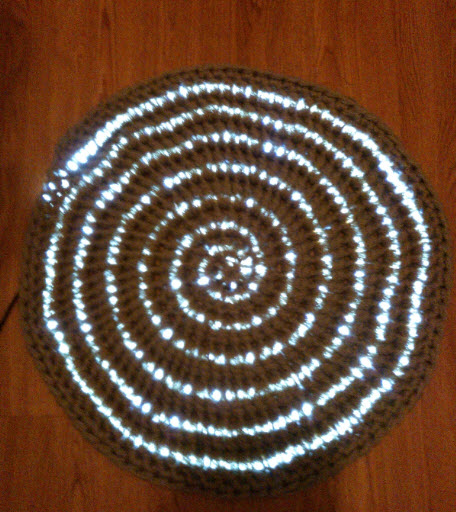 And I did a spot of secret bakering for yesterday for office (I made some for Mum too):

Well, it gave me some conversation material at the hospital.  Maybe not that sparkly, but as few of the other patients got involved, I don’t think it was too bad.  Oh, and as a result of wearing the capelet thing out, I have had my first crochet commission from a complete stranger.  :o)