I’m turning into a grumpy old lady, but I need to rant again.  There are often people on the train who get on wrapped up ready for the Arctic, don’t think to take off their coat and instead open all the windows without a thought for the people already on the train who have finally managed to defrost from the minus something temperatures outside.  Nothing makes me tut inwardly more (apart from maybe Sniffy Woman, who is still at it – freezer bag and all).  But yesterday’s woman took the biscuit, so:

An open letter to the woman incapable of dressing appropriately on a train:

OK, I admit that as SouthEastern had seen fit to cancel a few trains and funnel everyone to the same train, the one we both ended up on was more than a little crowded.  And maybe you regretted your decision to get a rush hour train with your two small children, mother and two sisters.  But seriously, where did you leave your common sense?  When it is freezing outside, the train company do occasionally think to put the heating on.  On those days, when the train is standing room only, it is going to get a little toasty.  What most people do in these circumstances is remove an outer layer.  They do NOT stand, shouting to their extended family in what looked like a 25 tog, full length puffa jacket done up to their chin and bobble hat that ‘If someone don’t give me their seat I’ll either throw up or pass out’.

Kudos to you though – I’ve not seen commuters move at that speed to offer up their seats before.  And I would have continued to be mildly amused, enjoying the distraction from our sardine status, had you not spent the next 10 minutes shouting to your family (who were incidentally all within a few feet of you and unless they all had serious hearing impediments, could probably have heard if you had talked at a normal level) that you should all get a seat – ‘especially the kids’.  Now, those kids were both under three by my estimation, and when those two other commuters were kind enough to give up their seats, the kids should have gone on the laps of adults – not got their own seat.  For the rest of us standing, you swapped out too tiny people for two full sized ones making sardine status even more sardiney.

Eventually, with the help of the gentleman standing toe to toe with me who also got the giggles at the weird things that continued on the journey (your family’s rather pathetic ‘demands’ over seats for all of you – we did notice you left your poor mum standing, the man hiding a huge bottle of beer in his jacket and trying to sip it surreptitiously, and the couple of legal types with rather upper class and vocal views of the world), I got over my frustration with you.  But please, in future, just take your coat off if you’re overheating.  Maybe even your woolly hat too.  I did both, and we all know I am part toad.

I think grumpiness must get repaid in more things to make you grumpy.  I got off that train where I had been assured that I could pick up a train that would get me home (mine had been cancelled) and to cut a long story short, when I went to find out where it was, I was told by the really helpful SouthEastern staff that they didn’t know because ‘they had lost the train’… (It turned out it was also cancelled.  So was the next one.)

And that was just part way through my three hour journey home.  Hooray for working for home on Tuesdays.  At least I had a days recovery time before doing it all again tomorrow and time to get rid of my grumpiness :o) 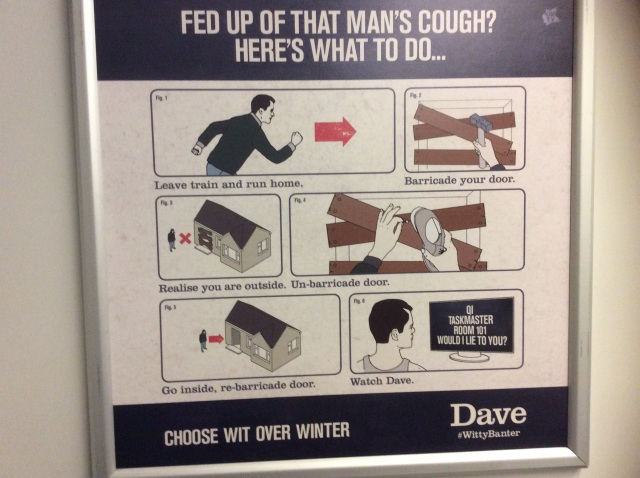 I saw this yesterday morning on the train. Ignore the advertising bit and the coughing bit. Maybe it’s just a good idea full stop :o)

erm...
View all posts by thepogblog →
This entry was posted in opinion, Pog Life, travelling and tagged argh, commute, commuting, how to dress on a train, no common sense, open letter, seriously?, trains. Bookmark the permalink.