On a hunt to find smiles

My new office is not a terribly happy place.  On day 1 of week 4 I had the first conversation that I hadn’t initiated and was very excited.  And then felt grumpy as that was hardly impressive.  The people on my floor don’t seem to talk and hardly even smile.  It was all  a bit Bah Humbug.  But I happen to believe that you shouldn’t moan about something too much until you’ve made an effort to change things, so last week I put on my secret baker hat again and…well, baked.

I did forget that I now have a 30 minute walk to round off my commute (bring it neatly to 2 hours) and that I would be carrying two rather heavy boxes as well as the back pack that makes me look like a German tourist (no offence to Germans) and weighs more than Little Pea, so it was a rather sweaty Secret Baker that arrived on Monday.  I put the boxes in the kitchen:

And… nobody paid the slightest bit of interest.

Then, a few hours later, I noticed people had started taking slices.  And they were chatting to each other. And, it’s hard to believe, but they were SMILING!  (Not at me, admittedly, but we’re taking baby steps here).  And then, very best of all, I saw this: 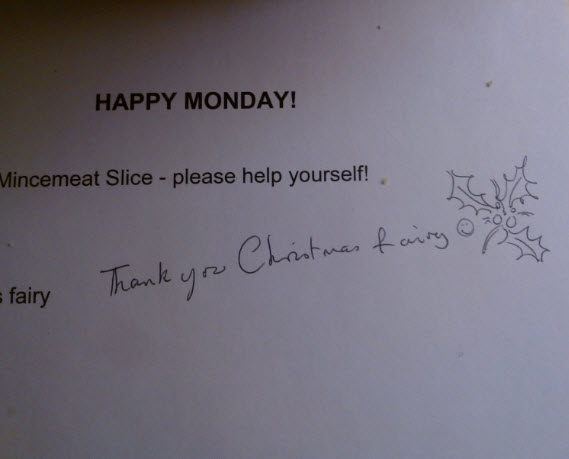 So my next step on the plan to find some smiles was to embrace Christmas party drinks at the pub, complete with Christmas jumpers.  This is not something I would usually do (the work drinks or bad Christmas jumpers.  The alcohol, I was ok with, but had to drive home.  Grrrr), but I figured a group of people who’ll put on a daft jumper for a night, must be a smiley lot.  And they were!  They aren’t on my floor, but at least I now know there are some lovely people in the office. 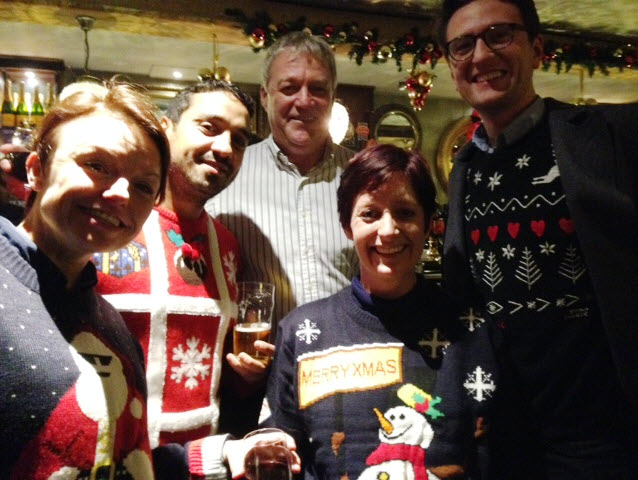 some of the smilers :o)

So slowly, slowly, I’m finding smiles.  Maybe it won’t be so bad after all :o)

5 Responses to On a hunt to find smiles