I nearly forgot how fun it can be to do something daft, just because you can.

A few weeks ago I worked on something for the company intranet.  It wasn’t terribly creative, but it was seen as pretty different from the usual thing we do.  I had drawn out some pictures (my very best stick men) to explain why the company had developed a particular product and I’d worked with the Creative team to make it look professional (and not really like what I’d drawn at all, which was a good thing).

I got to know the project manager I worked with quite well as we had a lot of updates and changes before it was finally signed off and published last week.  As we congratulated each other on finally getting it done, the project manager said that the next thing we worked on had to be even more creative.

‘A puppet show?’  I suggested

‘You provide the puppets and we’ll see what we can do.’  She said.  Well, she might not have said quite that, but that is what I heard.

Well, I’d finished crocheting my blanket and I have heaps of oddments of wool laying around, so last weekend I thought…’why not?’

I found my finger puppet crochet book and I made these: 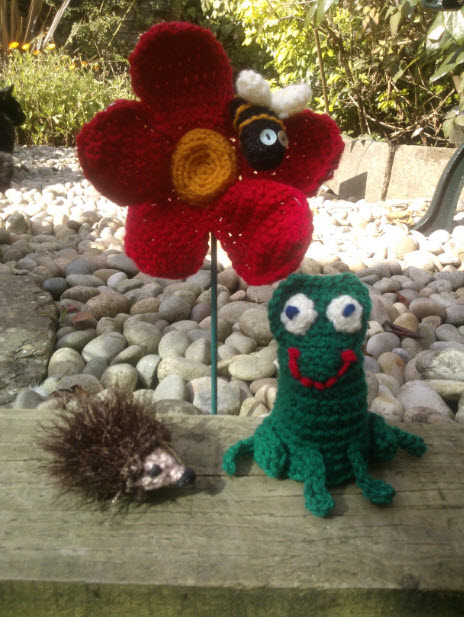 And this week, I left them on her desk with a note asking ‘When do we start?’ 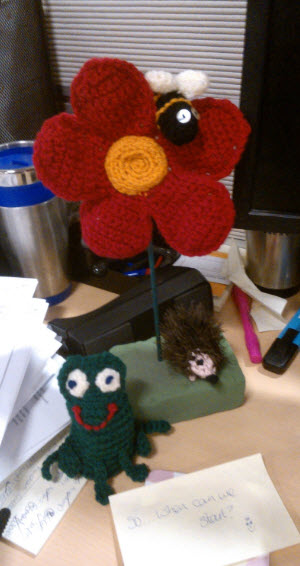 OK, we’d never do it really.  But it made her laugh, and to me, that made it a few hours of my weekend well spent.  I think daftness is good – when it’s intentional, anyway. :o)

erm...
View all posts by thepogblog →
This entry was posted in crochet, Pog Life and tagged crochet finger puppets, daftness. Bookmark the permalink.

4 Responses to Daftness. Just because.