Before I left for Tacloban I was immunised against pretty much everything, plus a couple more just for good measure.  I had almost 20 injections.

I packed a first aid kit that made it look like I’d looted a pharmacist.  I had everything I needed.  Everything except two little things….

On day two, I managed to slip while jumping over some corrugated roofing, and in the process I sliced open my right foot.  It was quite deep and it wouldn’t stop bleeding.  We were at one of the beneficiaries houses and he very kindly mopped me up and gave me a plaster.  By the time we got home, the plaster was soaked through so I went to my first aid kit to find another.

Before I left, one of my friends had given me a bag of emergency things.  One of these things was a box of Peppa Pig plasters.  I’d already packed ‘real’ plasters, but threw these ones into my bag, and a good job too – I couldn’t find the ‘real’ ones.  So as if it wasn’t bad enough that I was a foot or so taller than most people and combined with my whiteness I stuck out like a sore thumb, I then spent the next ten days walking around with Peppa Pig (or friend) peeping out from my flip flop…. 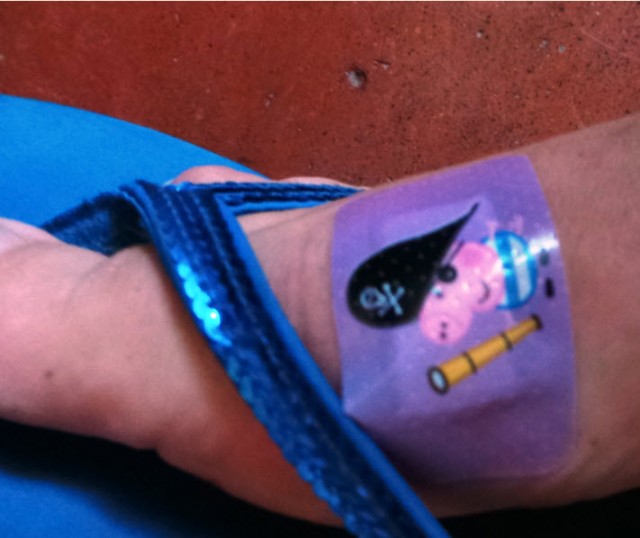 Day three was, I think, the day I thought I’d not washed myself properly (hats off to the Filipinos – even in heat, pouring cold water over yourself every morning is a challenge).  I thought, as I put on my bra that there was a bit of dirt on my chest.  It wasn’t until I pulled off the ‘dirt’ that I realised the wires in my bra had been rubbing against my skin with all the sweating going on, and I’d just pulled off two very deep scabs.  And I now had two raw holes, just where the ends of the wires should go.  It was far too painful to ignore, so I folded a wipe behind the middle bit of my bra to act as a cushion and collect the ickiness (Peppa Pig was not sufficiently cushioned for this job).

Day four or so, I assume due to the sweat again, my ears took a violent dislike to my ear rings.  My ear lopes swelled up, I took out the earnings and discovered they were all bleeding and, like my chest, leaking ickiness.

These things were annoying, but not a big deal.  I assumed they’d all heal in the heat.  They didn’t.  A few days later I was wishing I’d thought to bring some antiseptic of some sort, but I hadn’t.  So I asked Chona, Jackie’s sister if they had anything I could use.  Chona was very kind and looked through all her drawers and gave me the only cream she could find – a tube of unopened sulphur cream.  Now, I’d not heard of it before, but I slathered it on…feet, chest, ears…  I repeated the process a few times that day, and then I thought to read the box (which was printed in English).  It turns out that suphur cream is used for the treatment of (amongst other things), um, ringworm.

So I can confirm I didn’t come back with ringworm.  I also came back with a mental note that will never be erased to take more subtle plasters and antiseptic with me any time I go away in the future…

And for the record, the ears healed up fine.  Everything else needed antibiotic cream when I got home and will be remembered by the small scars they have left behind, but hey ‘every scar tells a story’ and all that! :)