Announcing the next Pog Plan!

I’ve been working on a plan for the last month.  I didn’t say anything because I wasn’t completely sure it was really going to happen, but this week I started my injections, booked my flights and…(drum roll please)….on 5th August I’m taking two weeks annual leave and going to volunteer in the Philippines.  The effects of the typhoon that hit back in November are far from over and, through a series of coincidences I have the opportunity to actually do some doing and help.

I’ll tell you the full story in a minute, but in case you just want to find out what I’m doing, pop over here and take a look.  While you’re there, it would be great if you could click the’ follow’ button as by the wonder of the interweb, it seems that the more people who click and follow a blog, the more other people will take note.  And if you could send the link to a few of your friends for them to follow it too, I might just love you forever.

If you’re still here, I guess you want the full story.  Here we go:

In January I looked into going on a volunteering holiday.   It turns out that there are a lot of ethics around it though – sometimes people are creating an industry to cash in on where it’s not needed and sometimes volunteering tourists take much needed jobs away from local people.  It was too much of a minefield and I gave up in case I ended up doing more harm than good.  I booked to go back to the Greek island I love and forgot about it.

In February I looked into a short additional holiday to see if I could do the single lady holiday with less chaos than the last time, but I never ended up booking it.  It just didn’t feel right (and also, I’m a complete scaredy cat and didn’t want to go on my own).

Then, last month a friend of a friend died.  A link was sent around Facebook to collect donations for charity in his memory.  Facebook, clearly realising I needed a distraction, threw back a couple more suggested sites when I clicked on the link.  One led me to a charity asking for volunteers in the Philippines.  This got my attention as back in November a colleague in the US, Jackie, had posted on the company intranet about her family in Tacloban days after the typhoon had hit.  It had brought me to tears and I’d donated money, and later clothes, but I didn’t understand why people were needed 5 months after the event.  I contacted Jackie and…well, the rest of the story is on the other blog.

Take a look at the ‘where it all started’ page if you don’t look at anything else.  It’s the blog post Jackie wrote in November.  And it shows the truly amazing spirit that her family have, and that she tells me the whole community share.

So I’ll be blogging there and here now.  Here you’ll get the unfiltered version and hear things like the fact I am actually terrified.  I’ve gone from not wanting to stay in a posh hotel on my own for three nights to going somewhere I won’t have a shower, on my own for two weeks (and the one thing I can’t live without is a shower).  I’m not keen on flying, but I’ll be on a plane for two days to get out there and one to get back (I still don’t really understand the time travel aspect there…).  And I have to change planes TWICE when I usually have trouble staying calm enough to find and get on one. I’m scared I won’t understand anyone, that they won’t understand me, and you know how things seem to ‘happen’ to me?  Well….it’s probably best not to think that one through too much!

But mostly, I am excited.  I really hope I can do something to make a difference.  And I really hope you’ll be following along, there and here :o) 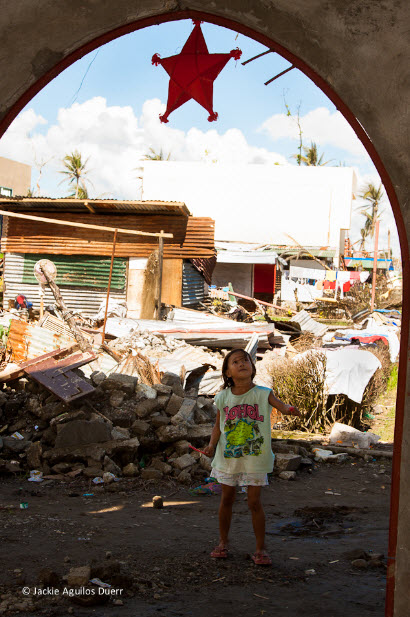 This picture is one of Jackie’s, taken in December 2013. We’ll tell the story behind it on the other blog sometime. I just love that the little girl is focused on the star with a smile on her face, able to ignore for the moment that just behind her is total destruction.

erm...
View all posts by thepogblog →
This entry was posted in Volunteering and tagged Candahug, colleague, help, Phillipines, support, Tacloban, volunteering, volunteering in the Philippines. Bookmark the permalink.

7 Responses to Announcing the next Pog Plan!