Another Secret Baker update – some smiles and some grumps

Posted on November 1, 2013 by thepogblog

My September Secret Bakering wasn’t terribly successful.  I made Dorset Apple Cake – mainly because it needed a lot of eggs and I seemed to have a ridiculous number in my fridge for absolutely no good reason (25 to be exact)

On the Monday, I picked up my bag containing the four cakes (which I’d stacked on top of each other overnight) and my arm lengthened a good foot or so.  I weighed the bag…it was almost half a stone.  I hefted them in to work, laid it out…and realised that it had all sort of collapsed in on itself.  I’m not sure if it was the apple or the fact that they’d squished each other in their stack, but I ended up leaving a note suggesting people avoid the middle pieces.

I thought I should redeem myself in October, so last weekend I made mum’s gorgeous Chocolate Spice Cake –and it actually turned out well, which in turn became rather problematic as we had a ‘hurricane’ on Sunday night.  It was just a few gusts of wind, but in their usual style, the rail people couldn’t run any trains on Monday morning, so I worked from home.  With a lot of cake.  I also work from home every Tuesday, so the quantity reduced a little more, but happily, on Wednesday I made it into the office with about 90% of the cake I’d made and popped it in the kitchen before anyone arrived.

I listened out for comments but I couldn’t catch what seemed to be a long conversation about the cake a while later, so I wandered to the kitchen on the pretence of getting a coffee.  The conversation between two men went something like:

‘It shouldn’t be allowed.’

‘No, I agree.  We stopped all children taking cake to my son’s nursery, because you never know with nut allergies.’

‘Exactly.  And what if there are nuts in this?  They may have written the ingredients out, but what if someone with an allergy didn’t read it properly?’

I felt a bit sad.  I didn’t say I thought if someone had a nut allergy they would probably read the ingredients, or maybe even give it a miss to be on the safe side.  And I didn’t say that yes, I know some people think might find it weird, but is it that bad to try to make the office a bit more smiley?  Then I remembered….the health and safety group had moved to our floor a few weeks earlier, and these individuals were part of that team.  Then I just felt sad for them.  What a miserable existence when you can only see problems everywhere you look.

And actually, it didn’t matter anyway, all three cakes were gone in a couple of hours, by then I’d heard lots of nice comments, and this was left in their place: 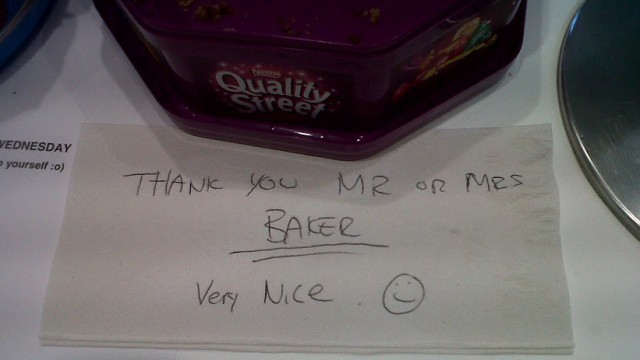 So there must be a few people around who can overcome the weirdness and enjoy a spot of secret bakering. :o)

erm...
View all posts by thepogblog →
This entry was posted in Uncategorized and tagged cake, health and safety, miserable gits, secret baker, work. Bookmark the permalink.