Well I thought things were going rather too well.  I even thought I was showing signs of being a ‘grown up’ and not having too many disasters.  I should have known better….

Last night TTB asked if he could come round after playing football.  I thought I should feed him something more than toast so stopped off at Tesco on the way home for food.  It took three minutes to grab the items…and 15 to get through the queue to pay.  As this happens a lot I decided to grump (nicely) at the Customer Services man.  He looked like he may have just left primary school so I was gentle:

‘I know it isn’t your fault, but could you pass on to the appropriate manager that the queues here are becoming increasingly frustrating and…’

‘I am the manager’

‘you are?  Wow, but you’re SO young’ (child proudly flashed his ‘graduate management programme’ badge at me) ‘ok then, in that case I’ve just spent five times longer trying to pay than shopping and it is your fault.  Please sort it.’

Maybe it’s karma what happened next.  I should have just been British and queued quietly because:

As I opened my front door I was wondering if I should have a quick nap before I started cooking or go for a short bike ride.  One look at Charlie though and I realised we’d be going to the vets.  His eyes were all icky and one wouldn’t open properly.  I got an appointment.  Sister 2 came over to assist in ‘Operation Cat Basket’.  Charlie and I meowed at each other all the way to the vet.

Half an hour later we left with drops, anti inflammatory and, in Charlies case, glowing green eyes (he’d had dye popped in them).  Nothing too serious happily, but now the evenings schedule was looking a little sick too.  Added to that, when I got home, it turned out that as part of Operation Cat Basket, Sister 2 had locked the cat flap and we’d inadvertently locked Norman in.  Norman, it seemed, had then tried to dig an escape route through the door mat and carpet…

I’d been advised to drink wine to keep calm.  I can see now that this was not great advice but it made complete sense at this point.  Half a bottle of wine later, as I skidded on an escaped piece of pepper and fell into the cat’s water bowl, the light bulb in my lamp went pop.  It turns out that right at the back of my kitchen cupboard I have every type of light bulb ever designed…except the one I needed.  And I needed it as I couldn’t turn the main light on when TTB was here as I didn’t have time too hoover and Norman had liberally spread his fur over the carpet, presumably in protest at not being able to get out the cat flap.

When I had the light bulb situation and dinner under control I thought I should probably get some of the anti inflammatory into Charlie cat.  I have no idea how but while attempting this I managed to spill my third glass of wine (which, in retrospect was a good thing) and get Charlie’s medicine in my eye…

I decided that there really was nothing more that could go wrong, poured another glass of wine and took a deep breath.  Just in time…TTB pulled up outside.  I attempted ‘sober’ failed at ‘serene domestic godess’ and opened the door drunkenly with a winking eye and a wet right trouser leg.

‘Could I have a quick shower? asked TTB

No problem…I retrieved my only spare towel from the airing cupboard and held it out to him.  At which point we both realised that I’d clearly used it in some sort of makingness as it was missing an interesting, almost bib like shape from one corner….

So yes, so much for having less disasters… :o) 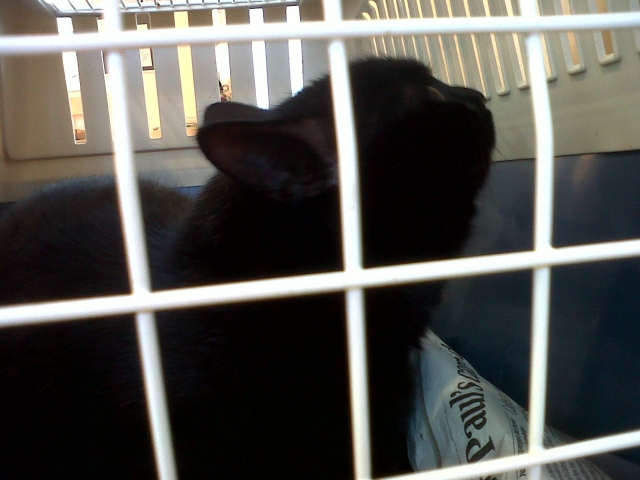 grumpy Charlie...he wouldn't even look at me!

2 Responses to karma and chaos