I’m thinking that the boys might doing a little attention seeking. Every night I have put it in the bin, but every night for the last three nights, Norman has bought in one of these:

It’s the remains of a cooked fish.

And they’ve taken it in turns to very gently bring in one if these:

So, they bring it in gently and then release it which results in me jumping around to catch it (they fly.  The beetles I mean).

Maybe they are being a little neglected while I cover the lounge with socks and the table with cotton felt and buttons.

They are not the only things being neglected though. I’ve got so bad at doing the cleaning properly (it’s currently just a bit of wiping before I embark on more Pogimal midwifery) that I have had to employ Sister 1 as my Girl Wednesday. And have had to insist on a confidentiality agreement.: 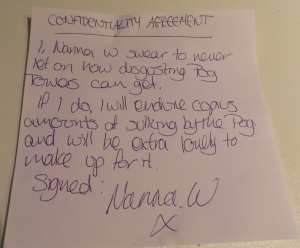 Anyway, I’d best get on. I have 5 blind Pogimals in need of some eyes. No doubt the fish and beetles will be presented to me shortly… :o)

erm...
View all posts by thepogblog →
This entry was posted in Uncategorized and tagged attention seeking, cats, Pogimals. Bookmark the permalink.