How a mouse can stop a week of humphing

Posted on February 6, 2011 by thepogblog

I had a feeling that the week just finishing was not going to run particularly smoothly when I fell out of my front door on Monday morning at 5.30am in the pitch black, directly into the basket of polyanthus on the door step.

The week continued in the same humph-inducing way, culminating in spending 6.5 hours on a coach on Friday.  And that was after the commute into London.  And before the commute home.  I could have got to Greece in less time. It was A Very Long Day.

Yesterday had the potential to continue in the same vein.  I woke up to find that next door had recently had a McDonalds.  I knew this because Norman and Charlie had bought in all the straws they could find, killed them (based on the bite marks) and then distributed them around the lounge.  I sat them both down to explain that bringing in rubbish was not the sort of behaviour I expected from them.  Then we heard it.  A mouse squeaking just above the rumble of the washing machine.  I groaned as they, presumably, got excited about the potential snack in the next room and we all raced through to the kitchen.  To find that the washing machine must have jumped a little and was making the cupboard door next to it vibrate – the cupboard door which I had tied one of their squeaky toy mice to. 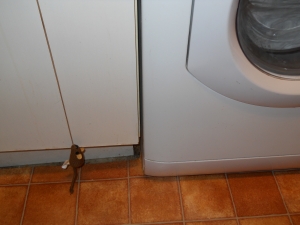 It wasn’t a great big belly laugh but the amusement factor of staring alongside two fur balls, all watching a toy mouse squeaking broke the humphy spell of the week and reintroduced the daft gene.  So once again, chaos has been restored in Pog Towers.

PS:  Thank you to the flower fairies for a lovely lunch (made even more entertaining with the senior moments that cropped up!)x

erm...
View all posts by thepogblog →
This entry was posted in Uncategorized and tagged A Very Long Week, cats, coach trip, humph, mouse. Bookmark the permalink.