Pog Tiny Towers (and a lack of guests)

I was given some great Christmas presents this year.  I have my first egg

cup since childhood which adds a new item in my repertoire of ‘quick-one-pot-dinners.’ And boiled egg and dippy soldiers has to be the ultimate in comfort food…

I also now own the softest PJs ever made.  Their softness has been provided, possibly at the cost of their appearance (fluorescent pink-with-snowflake-detail), but they are the toastiest, softest legs so I don’t care.

One present that I had asked for (does this scream middle age?) was a bird table (to be known as Pog Tiny Towers) made my a little old man who lives down the road from the Pog Parents.  My thinking around this had a number of different strands: 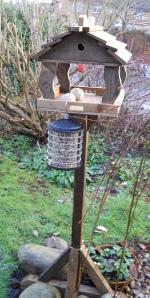 Doesn't that look inviting to you? (Well, if you were a bird...)

And what happens in reality?  Forget the bird dance of thanks.  Not one bird has been to visit.  Not one.  I have been told to be patient…but aren’t they hungry?  They have it on a plate (well, bird table) out there and not a shred of interest…

Well, if they don’t find it by the end of the week I’ll have to put some sign posts up directing them from the back garden to Pog Tiny Towers.  And maybe a ‘Food Served Here’ sign on the roof so they see it when they fly over.  Then the bird spotting can commence.  And should I get my Dance-of-the-Birds I’ll make sure I get photos to post here :o)

10 Responses to Pog Tiny Towers (and a lack of guests)