One thing I like about running is that in  lycra, everyone is on an equal playing field.  You can’t tell who has money, who has a high powered job, you can’t even tell who is actually good at running as they might be spritely as they just jogged out of their front door or they might be struggling because they already ran 10km as fast as they ever managed.  And I like that.  All judgement is suspended while wearing trainers.

I also like the fact that there is a feeling of being in it together.  Especially today.  Because today, only complete and utter idiots were out running and we all knew it.  Today on the seafront the wind was boardering on autumnal in its gusting, the tide was in, the waves were crashing and salt spray was combining with the heavy, horizontal rain to soak anyone stupid enough to be out there.  And the few people out running were grinning at each other, recognising their own stupidity in that of others. :o)

What I don’t like is the fact that last week I invested in one of those fancy pants running watches that do pretty much everything except tie up you laces for you.  I like the watch; it’s very exciting as I can now watch in real time as my heart rate goes up to numbers that might or might not be the end of me.  The bit that made my heart sink was realising that, as I’d suspected, the app I’ve been using for over a year to track my running was out in every single way.  The distances were wrong, the time was wrong, even the calories I’d been burning was wrong.  I’d not gone as far or as fast as I’d thought.  (And no wonder I’ve not lost weight – I’ve been allowing myself way more chocolate rewards  than I should have)  Humph.

In preparation for cakeathon I decided I had to run 18km.  I thought I’d done that last week, but based in the differences between the app and my watch it was probably less than 17km.  So I decided today was the day, despite the rain.

Well, clearly this Pog is designed to 1) run very slowly.  It was barely a jog in places, and 2) is better at running when the sun is in hibernation.  Because I did 20km.  TWENTY.  Without. stopping. once.  Even when I had to cross roads I ran up and down the pavement so I didn’t stop.  I pretty much can’t move now, but we’ll gloss over that.

There was one slightly odd thing though.  Either the fancy pants watch had a blip, or it’s not surprising I was so soggy when I got back (I weighed my clothes: 0.5kg, they were so waterlogged).  If I understand this bit right, it seems that at some point I was actually a meter below sea level… :o) 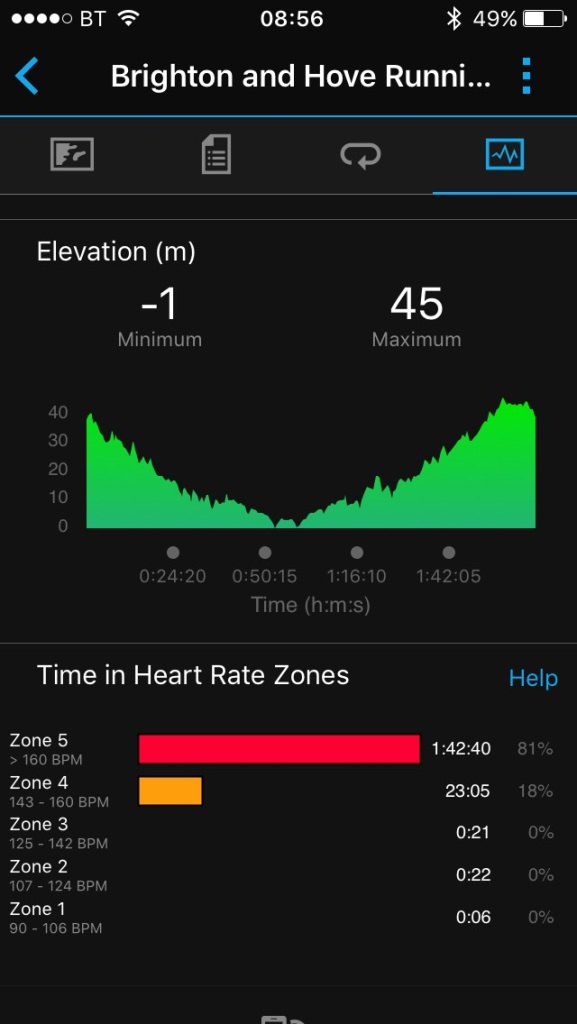 I did it though; soggy but smiley (well, almost smiley) :o)