Admissions of a (bad) cat lady 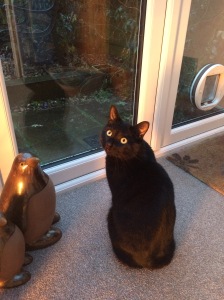 Today was weird.  For the first time in over six and a half years I was Normanless at Pog Towers.  At his last check up the vet had said his teeth were in a bit of a state (‘don’t you brush them?’ she’d asked.  I’d nearly fallen over laughing while I explained I quite like having two arms).  The cost of a feline tooth polish is ridiculous.  The only thing more ridiculous apparently is having to have teeth extracted because you didn’t have the teeth cleaned when you were told to.  So this morning I bit the bullet and we drove to the vets, Norman crying the whole way because he hates the car.

When we arrived at the vet I cried a little.  He had to go under anesthetic, and this scared me lots (once again, we must be grateful that I don’t have any actual children – you know – the sort with just two legs and a lot less fur.   I’d be a nervous wreck most of their lives).  Anyway, Norman and I were both brave, and I got to pick up a slightly confused furball with shiny teeth a short while ago.

It turns out though, that while this is my surrogate child, I don’t think things through properly in the way an actually Mummy probably would.  The nurse told me that ‘obviously’ I needed to keep him inside for 48 hours.  I’d not even considered this.  ‘I don’t have a litter tray’ I said.  ‘Hope he can cross his legs?’ she suggested.  We currently have a cat carrier partially full of litter in the middle of the lounge and I have my fingers crossed that Norman forgets it’s the same container that took him in the car of evil.

Next, the nurse told me that I needed to feed him little and often this evening and make sure it was something bland. ‘Rice and either plain chicken or plain fish’.  I don’t have chicken or fish in the house in a plain state.  I do have fish fingers though.  So I’m off now to cook Norman fish fingers and rice for his tea while he milks the fact that he has a poorly patch: