Today Norman got a card in the post which included a clipping of some things he could chose for his birthday present.  This was from an actual person, not a company doing promotions or anything.    That happens to all cats, right?  Anyway, included in the clipping was details of an app called ‘Paint For Cats’.

I had visions of being able to proudly display pictures my Norman had created, sticking them on the fridge, maybe framing the best ones to give as family Christmas presents.  I downloaded it straight away.  I am deluded.

The idea is that your furball chases a mouse around the screen like this: 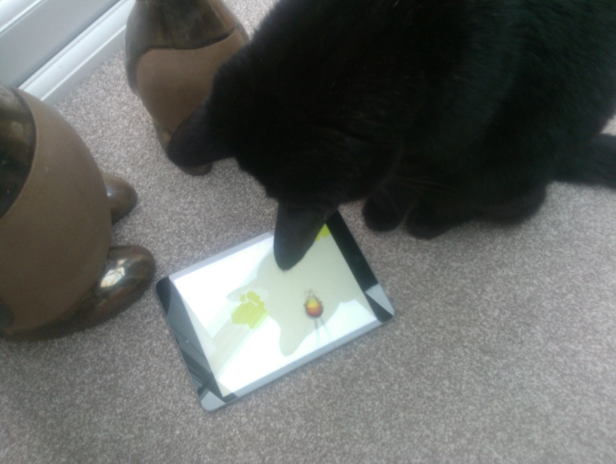 Norman played enthusiastically for two burst of 30 seconds, flipped the ipad, realised there was no actual mouse involved and sat by the conservatory door, observing me with his ‘seriously?’ look.

I think he has a talent, I really do.  He’s just not interested though.  He was more enthusiastic about the foil from an Easter egg:

But there was a more successful moment today.  One of my birthday presents from my family was personalised number plates.  The documentation came through from the DVLA yesterday and so today I nipped up to the local garage to get the plates fitted. And I now officially have a Pogmobile!  :o)

2 Responses to Painting and Pog Plates