Hanging in there with cakes and caterpillars

It was time for a bit of secret bakering on Monday.  My last offering of flapjacks hadn’t seemed too exciting, so I decided to push the boat out and make my Mum’s chocolate spice cake which is a family favourite.  It turns out that when you make four of the things, only have two cake tins and an average sized oven, it also takes hours.  Literally.  There’s icing and everything.

I know this is supposed to be a nice thing to do for other people, but honestly, after the hours of baking, juggling two tins with my rucksack on the 6.03am to Charing Cross and a 30 minute trek from the station to the office, I wasn’t feeling very nice.  I was feeling rather un-nice in fact as although I have started to meet a few lovely people, a lot don’t seem that lovely and some seem distinctly unlovely.  I started thinking out an alternative to going to all this hassle for people who I didn’t actually want to be nice for.  Yes, I was in a thoroughly bad mood. 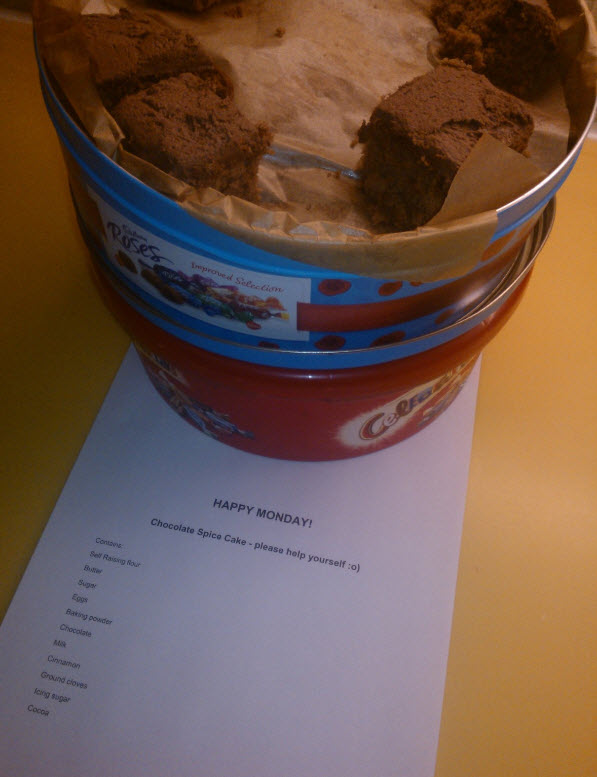 And it got worse when I heard some people in the kitchen discussing the cake…and how they didn’t like it.  (Tip: If you don’t know who baked a secret baker cake, don’t rip it to shreds when the secret baker could be making a cup of tea, just to your right).  I know it’s completely irrational – people are allowed to dislike my baked goods – but I wanted to cry.

I ignored myself though, and I am so pleased I did, because, proving that sometimes you just have to hang on in there, two very lovely things happened that afternoon.

First, I was asked for the recipe for the cake by someone, who managed to work out I was the secret baker as she liked the cake.  My baking had been enjoyed.   (Incidentally, this someone happens to be the wife of an ex boyfriend from years ago.  I swear the fact that we now work on the same floor in the same office could only happen to me.)

And then I got some post in internal mail.  Mail at work for me usually consists of magazines that I’m sure I never subscribed to, but this had a handwritten envelope.  And contained….two caterpillars!

They were a belated birthday present from someone who had seen my Very Hungry Caterpillar cake.  And they made me smile a lot.  Partly because I have colourful caterpillars hanging out on my desk, but mostly because someone (from my old office, I admit), was lovely enough to send them to me.

In the end, it was a smiley day.  And it seems that everyone has got in on the act of wishing people a Happy Monday.  I spotted these on the walk back to the station:

So hang in there on grumpy days – there might be a smile by the end of it.  (And I will try very hard to remember my own advice.  And just look at my caterpillars when I forget)  :o)

2 Responses to Hanging in there with cakes and caterpillars