I love looking at other people’s photo-a-day type projects, so I thought I’d snaffle the idea.  I’m not sure it will be very interesting as there is a danger 90% of these will end up being work, Norman or crochet based, but on the off chance it will make me look at things differently (and maybe even remember to snap them), I thought I’d give it a try.

I should mention, most of these will be taken with my camera phone so wont be great quality either, but here you go:  the start of a possibly tedious and probably bad quality series of posts. ( I really know how to sell things, don’t I?!) 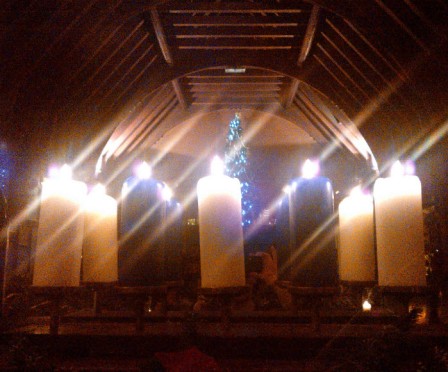 2nd January 2014: Christmas candles at a restaurant with lovely friends

3rd January 2014: On my way home from visiting the Lovely Nut, Hampstead Christmas lights (get me – so posh!) 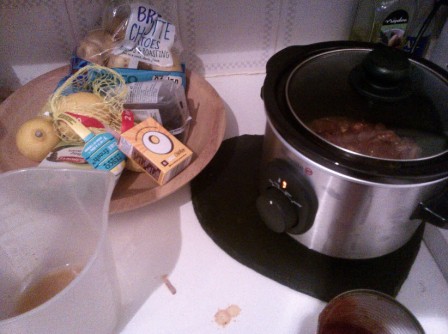 5th January 2014: Little Pea and Ele – a huge elephant ornament that belonged to my grandad, which LP loves. The knitted bricks at the front were lovingly knitted (and sworn over a lot, apparently) by NannyB (my Mum).

6th January 2014: ‘I’m not sure about this slow cooker you know’. Norman spent about 30 minutes watching the veggies inside bubble. Possibly just in case anything fell out that he could snack on.

7th January 2014: Hail storm! (Only you can’t see the hail). The last few weeks have seen silly amounts of water. You can only drive one way out of Bumpkinsville at the moment as the other road has been flooded since Christmas Eve. The next town down has seen people evacuated when their houses flooded so I am very lucky, although the stream that runs behind my shed does sound like a river at the moment. It’s just as well I can’t see it!