When I started this blogging thing ages ago, it was just intended to entertain a few friends.  I didn’t read other people’s blogs much, I just wrote, enjoyed it a lot if people ‘liked’ or commented and that was that.

Recently though, I’ve started to read lots of other people’s blogs and love finding out about their lives and I’ve realised that when I read, I need context.  I want to know where people are in the world, what sort of life they have, and if I can see what they look like, all the better.

When I started blogging, it never occurred to me that people I don’t know would take the time to read my rambling, yet according to the power of technology, my admin view tells me that in the last 16 months, people from 73 countries have read some of what I have written.  I don’t even know people in seven countries!  So it’s made me wonder if I should put a bit of information on the main blog page about me like most people do.  Nothing that could actually identify me, but, something.

While I was pondering this, in the way that these things happen, I was asked to provide some detail for a big meeting coming up at work.  We were asked three simple questions:

Simple they might be, but 2 and 3 actually caused me a few issues.  I wanted to be me, but still look a bit professional.  I read through other responses as they came in and they were good.  Quotes came from Mark Twain, George Bernard Shaw, Groucho Marx and Leonardo di Vinci.  I looked through a couple of quotes books I have.  I looked on line.  I gave up with caring what other people thought and quoted Winnie the Pooh.

My actual answer was:  “When you are a Bear of Very Little Brain, and you Think of Things, you find sometimes that a Thing which seemed very Thingish inside you is quite different when it gets out into the open and has other people looking at it.”  – Winnie the Pooh.  (Winnie the Pooh has been my hero since I was read the books repeatedly as a child, so it’s good to know that when that thingish thing happens to me I am in good company.)

Next it was the fact most people don’t know about me.  There is usually a reason that people at work don’t know the things they don’t know (read that slowly, it does make sense, honest).

I obviously needed to come up with something else.  So I decided on this:

‘I have a tendency to panic.  At my first driving test I got in such a panic when I was told to get in the car that got in the passenger side.  I failed.  I’m also related (in a dim and distant way) to the captain of the Titanic.  When you combine those things I guess it’s not surprising that I rarely have passengers in my car.’

Unfortunately, this is 100% accurate.

To my surprise, the man who is running the meeting, and is my boss’s, boss’s boss ‘liked’ my response (our Intranet let’s you do things like that in the same way as Facebook), so maybe it is ok to just be yourself rather than trying to be clever.  I’m still glad I didn’t use the yellow sweets one though :o)

PS:  I shared my ‘fact most people don’t know about me.’  Do you fancy sharing yours? 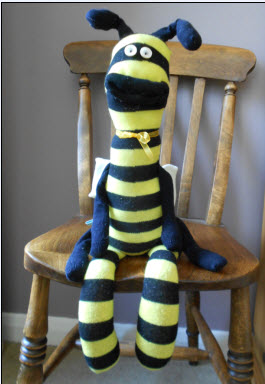 This is the picture I provide when asked for a head shot. I think I will use this on the blog :o)

erm...
View all posts by thepogblog →
This entry was posted in Pog Life and tagged blogging, introducing, quotes, work. Bookmark the permalink.