A couple of hidden smiles

Some of you lovely people have enquired about how my view of the brick wall is in the new office.  I can confirm it is still there.

Today I was wishing it was all the way around me though, as the bloke on the desk opposite sniffed and spluttered in my direction.  Then he got a tissue out (hooray!).  And made a twisty thing with it which he shoved up is nose.  And followed with his finger.  Almost up to his elbow.  Then he inspected what he’d retrieved.  Why would anyone think that was ok?

But I digress.  I’ve found that if I wander to the big bosses area they have a better view, so before anyone arrived today I took a few photos of the architectural salvage yard they look out over.

It’s great finding unexpected things when you think that all there is out there is a brick wall.  (I just have to get a lot more important if I want to permanently swap the view to that from snotty bloke).

Here’s another (In London, but not from the office). 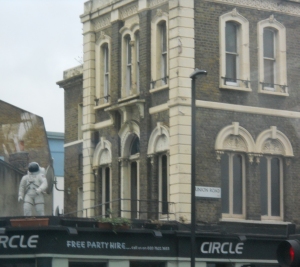 So there you go.  A couple of hidden smiles :o)

erm...
View all posts by thepogblog →
This entry was posted in Uncategorized and tagged London, office, view. Bookmark the permalink.