A Lack of Labradors

This has been quite an animal orientated weekend covering both Arghs and Ahhs (Thank you Teacher Ems for defining the difference between the very similar noises).

The boys and I had to visit the vets for worming (them) and weighing (also them, but I jumped on the dog scales to see how they compared with my set at home.  Not favourably it turned out…even when I stood on one leg).  Anyway, as is usual, the boys had a panic on the way there, pooed in the cat carrier and by the time we arrived they were liberally covered in the stuff.  As this is a regular occurrence we were shuffled into a room for me to clean them up.  Unfortunately at this point the only option was to wash them in the sink which Norman took offence to and, soaking and soapy shot up my arm, over my shoulder and into the hood of my top.  I had to be rescued / have Norman extracted by one of the nurses.  Charlie was equally unimpressed but at least we had got it over with.  Or so I thought.

(Incidentally, to explain the Labrador reference, the vet mentioned that Norman may well be a Labrador in disguise.  This is due to his size (apparently ‘fat fur’ is not a generally accepted condition) and the list of food I gave her of things he will fight me for (bran flakes, raw mushrooms, avocado skin, dry weetabix and most recently, photographs).  Charlie just has an obsession with pansies.  Less of an issue but a little irritating as he has removed and eaten all the flowers on those I planted last week.  Incase you don’t know, bith Charlie and Norman are cats.  Not Labradors.)

The poo incident occurred again on the way home so we had a repeat washing performance only this time they both shot out the cat flap in their soaking state.  That would have been fine had it not been a cold day but as it was they ended up scaring themselves (and me briefly) by steaming on the back step…

They got their own back though.  I assume to demonstrate their disgust at the proceedings they decimated this: 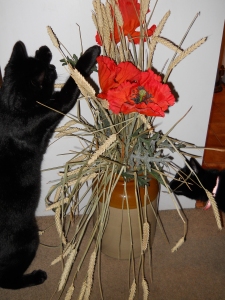 Sister 1 and Brother in Law (BiL) picked up the lovely little lump of gorgeousness that is Lola.  I spent a few hours today cuddling, playing and trying to encourage her to fetch her ball of puppy proportions (ping pong rather than tennis sized).  She is not a Labrador either.  She’s a Beagle.  And I can’t wait to see her again :o) 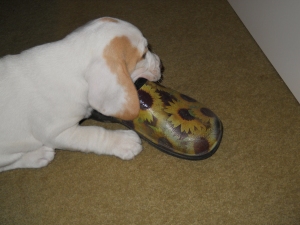 erm...
View all posts by thepogblog →
This entry was posted in Uncategorized and tagged ahhh, argh, Charlie, Lola, Norman, vet. Bookmark the permalink.