Posted on February 2, 2022 by thepogblog

For a hypnotherapist I’m scarily good at getting my words in a tangle.  The good news is that ‘confusional hypnosis’ is a thing so when my words come out wrong I can confidently convince myself that it was what I’d intended all along…

It works in hypnosis, but less so in actual real life.  Like Monday.

At the top of our road is a nature reserve.  Every year the council bring sheep onto it – it’s  called conservation grazing as the sheep keep the brambles under control and encourage the wildflowers to grow.  It works fantastically as there are so many wildflowers up there in the summer – it’s like nowhere else I’ve been to.

Now the only slight downside of this is that the nature reserve is a regular place for people to walk their dogs.  The sheep graze in three sections and each section is fenced off which makes it better but last year I saw some people who clearly didn’t know the sheep had arrived and there were a few incidents with dogs chasing the sheep.  But there is a local dog owners facebook page so last week I thought I’d post pictures of the sheep’s arrival so people had a better chance of knowing.  Some people love the sheep and all they do.  Some are miserable and hate that their dog walk has to be minimally changed.  One of the latter responded to my post. I ignored it.

And on Monday I spoke to the park ranger who was putting up the fences and asked him a bit about the sheep, who owned them (on loan to the council from a local former for the purposes of conservation) and whether they actually ate the brambles (not the big old stuff…they remove that before they go in.  They eat the young shoots though, which controls the brambles for a bit of the year and stops them taking over)

I told him about the moany person when I’d posted the detail to the facebook group.  He thanked me for doing that and asked which group I’d posted to.

I did tell him I’d meant to say the village dog owners group.  But I suspect he had stopped listening at that point…. 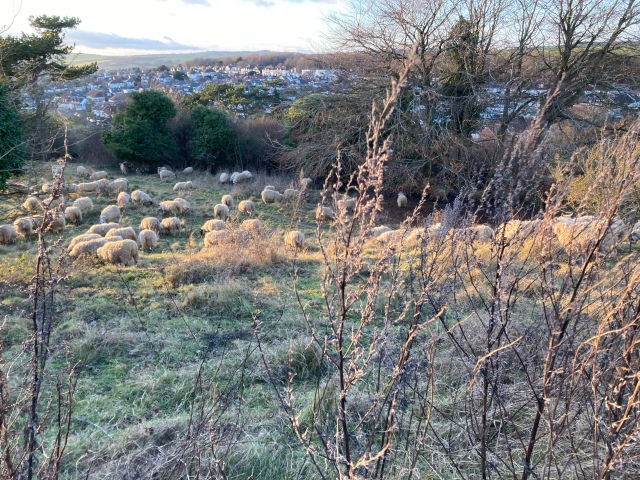