You know I told you that having signed up to a dating site I was talking to a lovely man?  Well last night we went on a First Date.

I have no idea how it got that far.

The problem with internet dating is that first impressions are made on email.  And the problem with that is that I am REALLY good at typos.  The most impressive being when I was attempting to bring into conversation that we might not recognise each other.  I was suggesting alternatives to the usual

‘carnation in a bottom hole / copy of the financial times’.

I didn’t spot it until after I sent the mail, and followed up quickly with:

‘BUTTON hole. Clearly I meant button hole. Absolutely nobody should wear a carnation in their bottom hole. Ever.’

I’d been informed that my usual rather military boots / comfy trainers that I walk in were not first date appropriate so  I told him that the only concession I would make to changing how I usually dress (which never included a carnation) was to wear proper shouts.

So yesterday after work, with no carnation in any awkward orifice and proper shouts on my feet, I went to meet him.  I promptly got lost and because I usually wear flat shoes to walk any distance I got cramp in my big toes (Who gets cramp in their big toes?!).  I had squished my trainers into my rucksack that doubles as a small house, but there wasn’t room in there to exchange them for the contraptions of torture on my feet.  I did try, but that meant I had to unpack the rucksack at the side of the road, and then I couldn’t fit one of the trainers back in.  It was all becoming a bit traumatic (and just the idea of meeting was a trauma in itself).

Anyway, I got there.  The plan was just a coffee, but I asked the waitress for wine.  She brought me tap water.  I must have looked like wine would be a bad idea at that point.  Lovely man arrived.  He got wine….I got, something very orange that swelled weird.  Finally I got my wine, we started talking and….we didn’t really stop.

I am happy to report that there was no talk of prostitutes, no newspaper print over anyone’s face, and none of the other weird things that have happened on previous dates.  In fact the only thing that went rather wrong was when I tried to put my jacket on and somehow it ended up upside down.  Like a two year old, I put my arms in anyway and there was a clatter as the vast quantity of mint imperials I keep in my pocket at all times clattered to the floor and rolled all over place including under the feet of the rather uptight couple on the next table.  They were obviously already irritated by us laughing lots and loudly, but possibly a bit more so as I retrieved the mints while we both giggled like children.

Just as we were leaving, the lovely man pulled a gorgeous bunch of roses out of his bag for me.  Thoughtfully, he said he hadn’t given them to me at the start of the night because it might have been awkward, and that this way he could say they were to say thank you for a good evening.

‘And if the evening hadn’t been good?’ I asked

But he didn’t just give me a bunch of roses, he gave me something so much better.  I walked to the station, still wearing my proper shouts, wondering if I would ever be able to walk normally again.  Then I realised….the flowers were in a plastic bag!  I ripped off the evil shouts, put them in the bag and pulled on the little clouds of air that are my trainers.

Roses AND happy feet after an evening of laughing.  What more could a girl ask for? :o) 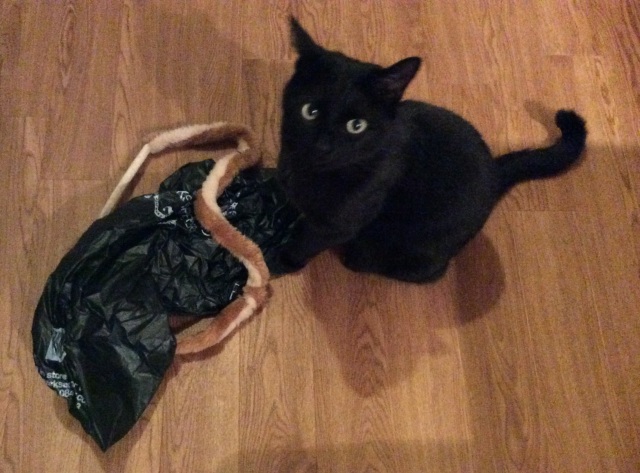 Norman was less impressed by the bag than me. He set snake on it.

4 Responses to A first date