It *was* an emergency…

Sister 2’s boyfriend is really good at baking cakes.  He made one a few weeks ago with caramel loveliness in it, and then admitted it was tinned caramel stuff.  I love it and admitted that I had a tin in my cupboard for ‘emergencies’.  He said it would have to be a big emergency to warrant opening a tin, just for me.

I can confirm that the big emergency has happened – well, a serious of small emergencies combined to feel like a big emergency – and the tin is now open and now only about a third full….

6.30am – six stations into the ten station journey, grind to a halt

7am – (should be at destination) ‘Due to signalling problems, we’re staying here for the forseable future.  You might want to get on a train going the other way – if any turn up – go back down the line, change routes and try again.’

8am – arrive at station down the line to start again.  Staff: ‘We have no trains going anywhere’ World and his dog all trying to get somewhere:

8.30am – locate train going to Bumpkinstown.  Get on train, arrive, find train that may or may not be stopping at station actually needed (Sign says one thing, announcement says another).  Get on anyway.

8.33am – Breathe sigh of relief that train stopped at the station where my car is parked

9am – Arrive home and start work, feeling somewhat irritated that I could have had an extra four hours in bed and saved myself a cross country journey.

8pm – receive email that intern’s contract is not being renewed in two weeks.  Intern only does 15 or so hours a week, but these are now mine, all mine.  Have panic.  Post panic on Facebook.  Receive lovely responses.  Continue to panic.

Midnight – remember critical piece of work that was supposed to be done first thing.  Do work.

7am – realise that there’s a lot more to the midnight piece of work than thought and try to coordinate  that with showering, dressing and drying hair

8.45am – smug receptionist informs me that my appointment is not until 11.30am. ‘Discussion’ continues until she realises that she’s looking at the wrong part of her computer screen.

8.55am – happy moment that although the nurse is running late, I bought my crochet with me.  But not my glasses.  Serious amount of squinting to try to see what I am doing

9.10am – revisit of last night’s panic for no particular reason

9.20am – get home and remember that Sister 1 delivered her homemade banana loaf to me yesterday (Hooray!)  Decide today is the day to open the emergency caramel and combine the goodness of both:

9.23am – realise I probably couldn’t get more sugar on a plate if I tried and decide to make it healthy.  Ta dah!: 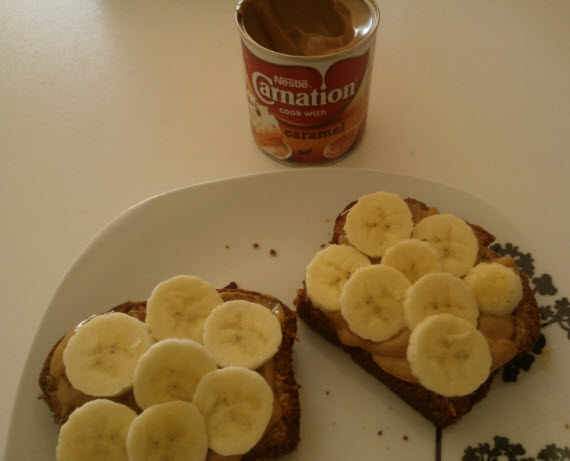 And that would have been the end of that, except later in the day I thought I should probably have a healthy dinner (as all I’d eaten was the banana bread / banoffi creation which although included one of my five a day, that was probably all I could claim in the way of healthiness).  I got some chicken out the freezer to have with salad.  I put it with me in the conservatory to defrost (I know that’s not a sensible way to defrost chcken, but I’d left it a bit late and it’s warm in here) and got very involved in work.  So involved, I didn’t notice Norman tucking into it earlier…which in itself is a bit of an emergency.  It might just have to be banana bread / banoffi creation for dinner too :o)

2 Responses to It *was* an emergency…