Sisters are doin’ it for themselves…just about

On Saturday I went on a car maintenance course.  Before I left home ‘Sisters Are Doing It For Themselves’ came on the radio, which seemed rather appropriate.  I sang along, feeling quite smug that I only really needed to learn how to change a wheel on the course – I was pretty sure I knew everything else.  (For long time readers of this blog who may remember a few previous car incidents, I should point out that knowing and doing are two very different things).

Now, I’m not sure if something happens to me in public where everything just drains out of my brain, or if I am just deluded in how much I think I know, but from the very first moment I realised that this sister might be doing it for herself by the end of the few hours, but she certainly needed a bit of help until then.

The female mechanic started us off slowly.  ‘If you could just pop your bonnets?’

I swear I’ve opened the bonnet on my car before, but someone had since moved the handle.  I’m ashamed to say that after a bit of hunting, I had to swallow my pride and admit I couldn’t even complete this simple command.  It got worse a little later when we had to test our lights ‘Indicators?’ shouted the mechanic as she stood at the back of my car to check all the lights were working.  I turned on the window wipers. ‘Brake lights?’  I panicked.  I had to ask which pedal it was.  I’ve been driving for over 20 years. I am an embarrassment to the female race. 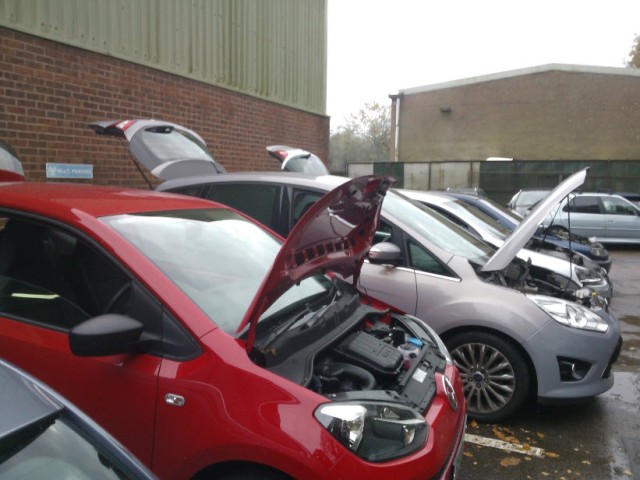 We did lots though, and now I know about oil, brake fluid, water, screen wash, how to jump start and jack up a car, understand which warning lights mean what and which ones are worth panicking over and everything is topped up for the winter.  When it got to changing the wheel, we used one of the garage’s courtesy cars (just in case we managed to scratch our own – I can’t help but wonder if that was based on my total incompetence…).

Anyway, I turned the air blue with my swearing, but I did it, much to my amazement.

It was suggested that I get a big old turny thing for undoing the nuts rather than using the tidily one that came with my car, so I can jump on it if needs be.  And once I remember the proper name of the turny thing so the people at Halfords don’t laugh at me, I’ll be off to get one.  Then it’s just a question of, should I ever need to change a wheel, would I be brave enough to drive the car afterwards?  I’m thinking maybe I should take out AA membership, just to be safe :o)

And in other car related news, 10 months after I was told I had to stop driving due to that falling over thing I was doing, and 9 months after I was told I could drive, but the DVLA wanted to check if they agreed in the long term, I finally got official notification.  In their wisdom, the DVLA have decided that it is indeed ok for me to keep my licence, but I am not allowed to drive ‘a tricycle (a three wheeled vehicle)’.  Um…right.  So that’s the Reliant Robin plans out the window then.  It’s just as well – I’ve no idea how you’d change a wheel on one of those.  :o)

2 Responses to Sisters are doin’ it for themselves…just about