When I was at school I was bad at sport.  Really bad.  After three years of trying to teach me to hit the ball in tennis, the PE teachers gave up and let me sunbathe through the lessons instead (this was back in the days when we had summers).

Sister 1 and 2 were not afflicted with the same total lack of hand / eye coordination.  Neither, it seems, was TTB.  In among the list of sport he plays is golf – the one sport I’ve always been really scornful of.  On the basis that you shouldn’t knock it til you’ve tried it though, when TTB suggested taking me to the driving range I decided to give it a go.  My theory was that once he saw how bad I was he’d never ask again (for the record, this theory also works for ironing shirts – do it REALLY badly once and you’re never asked again ;o)  )

Anyway, we went.  I broke the tee machine thingy by hitting it rather than the ball on my first attempt.  We took it all apart, fixed it and…amazingly, I got the hang of it.  Sort of.  Ish.

Apparently it’s not that normal to cheer when you hit a ball and there wasn’t much laughing other than from our end of the place,  but (I’m almost ashamed to admit this) I kind of enjoyed it!

TTB ‘kindly’ took a video of without me realising but when I discovered that I actually hit the ball a few times in it, I made Sister 1 and 2 watch.  Sister 2 laughed when TTB cheered me.  Well, I thought it was a cheer.  It turns out it was ‘Fore!’ he was shouting and I have discovered since that it’s a warning a rouge ball may be about to hit players or spectators.

Humph.  Well, at least I hit the ball.  I almost want to contact the PE teachers of my younger years to let them know… :o) 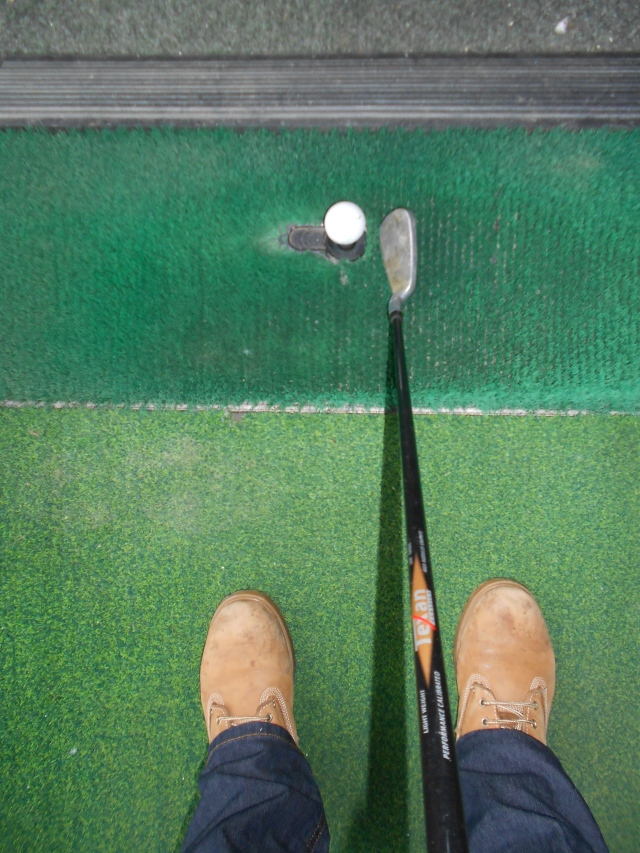