Why you should always have a coffee first thing 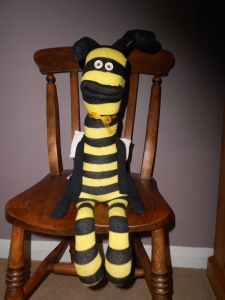 This weekend I have pretty much confirmed that I’m bad at sitting around doing nothing.  On the Pogimal front I have made a Squaddimal (who is off to Afghanistan for his adoption by a slightly more official looking squaddie), a YMCA-imal (who will shortly be touring Macadonia doing some charity work), a tiger-dragon-imal, and a two foot bumble bee. (imal).  (All pictures can be found in the Pogimals being rehomed face book page should you fancy a peek.)

Things were close to getting out of hand this morning though when I work up knowing that I HAD to varnish three frames before I did anything else.  And the ‘anything else’ included having a cup of coffee or waking my brain up a little.  Which is why I ended up in the garden, in my dressing gown giving my chest and neck a high gloss sheen.  It’s also the reason why 30 minutes later I was near enough washing in white spirit.

Still, it didn’t dampen my enthusiasm for getting things done so I ended up making three pictures and a strawberry and white chocolate cheesecake with….wait for it….home made strawberry coulis.  Get me!

erm...
View all posts by thepogblog →
This entry was posted in Uncategorized and tagged Bumble Bee-imal, not enough coffee, pictures, Pogimals, Squaddimal, varnish. Bookmark the permalink.