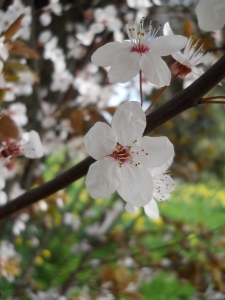 On my bike ride tonight (yes folks, that is the third one in three days) I had a conversation with myself on geography (I know.  I lead a terribly exciting life).

This came about because my train was stuck outside London for sometime this morning.  Why?  Because, as our driver informed us, the train in front had ‘missed its turning and had unexpectedly ended up at the wrong station’.  Presumably it then stopped in shock which was the reason for our hold up.  Although a little surprising (I didn’t think trains could do that or alternatively that train drivers had a sense of humour), I can’t really comment.

You see, the geography gene (and possibly years of geography lessons) bypassed me and my sisters.  Sister One was quite surprised to find out that Berlin wasn’t in Ireland (which, it turned out, had rather coloured her view of concentration camps in World War 2.)  Sister Two meanwhile, or possibly Sister One again, thought that Milan was in the USA.

I’m also pants with geography but tend to keep quieter about it.  Except that one time when I was meant to drive from Somerset to Kent.  And ended up in Cornwall  :o)

erm...
View all posts by thepogblog →
This entry was posted in Uncategorized and tagged bike, geography, train. Bookmark the permalink.