Well, that was rather chaotic for a Friday morning.

I got up to make a series of discoveries.

Having cleared all the mushrooms and blackbirds present, I stuck a tea towel around the leaky thingy and rushed off up to the pool (well, the un-fatness plan stops for no leaks and it was way too early to be calling a fixer-man).

Happily, no flood had taken place by the time I got home.  The fixer-man knows me well and having been informed that water was leaking from the thingy on the tank whatsit, he came straight over and did his fixing thing.

The final chapter in my Friday morning was when Charlie regurgitated the feathers he’d eaten rather than used for decorating purposes.  All over the carpet.  And who says I don’t lead an exciting life?  :o) 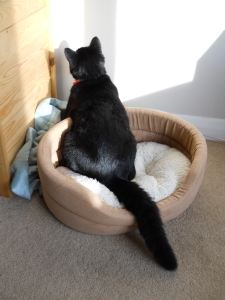 A fur ball in disgrace...