The genius of Google

When I was at university I won a prize.  I’m not the sort of person who wins prizes so I rushed off to find my head of course tutor to ask what it was for.  She had a slightly traumatised look on her face when she in formed me that it was for asking questions.  Specifically, for consistently asking the most questions of any of my year for the duration of our three year course.  I never did find out if that really was the case, but it is safe to say that I do ask a lot of questions.

Google is my best friend these days.  I Google most of my life.  I must have caused a huge amount of irritation pre Google (which uni was).  Google is amazing.

Never more so than this week when I wanted to find a song and had no idea how to phrase it so Google would be able to answer.  Out of ideas I typed exactly how I would ask in person.  ‘What song goes da da da daah?’ and you’ll never guess what.  It knew.  It knew exactly what I meant!  Google, the one that knows all the answers told me it was Beethoven’s 5th symphony.  But I actually wanted a different version of it, and I didn’t know what it was from or who was responsible for it.  Google didn’t let me down.  A couple of questions later and I discovered I was actually looking for Walter Murphy – A Fifth Of Beethoven.  Google is a genius.

Later on I was lying in bed and couldn’t sleep and it dawned on my that Google is good, but could Siri be better?  I got out the lap top and asked exactly the same question.  I think Siri needs to clean out his ears: 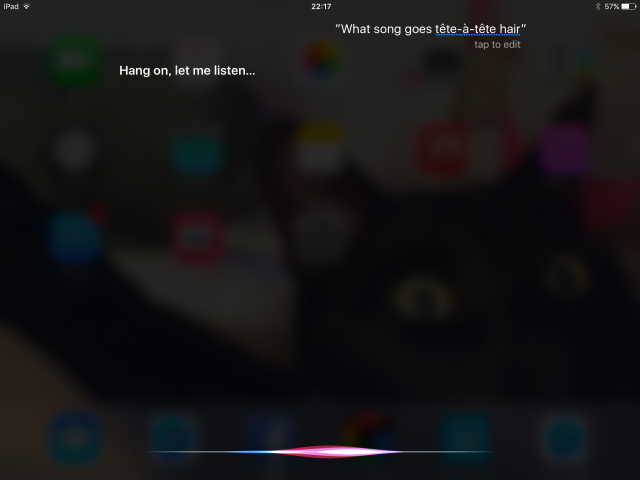 Siri may be younger and shinier, but Google is definitely still my best friend :o)

erm...
View all posts by thepogblog →
This entry was posted in technology and tagged genius, Google, prize, questions, searching, siri. Bookmark the permalink.