A commute with a box. A very big box.

We have (another) big thing happening at work next week.  I had to arrange a ‘fun’ element of the day, along the theme of ‘Connection’.  I decided to hold a giant Connect 4 tournament (with additional work type stuff to get people finding out about each other).  I researched the boards and was impressed with myself that I realised I could buy one for the same price as hiring one, and we’d get to keep it.  I got budget approved and ordered one from Amazon.  I was quite proud of myself.  I clearly remember typing in the office address for delivery.

Only I got home on Wednesday night to discover a HUGE box blocking my front door.  Oops.

I just managed to drag the box inside and sat down to look at it and work out what the hell I was going to do:

There was only one option really.  I couldn’t courier it to the office as that would take a massive chunk out of my budget for the day.  I had to carry it in with me.  I took it out to the car (I couldn’t get my arms round it to lift – it weighed nearly 2.5 stone and was wider than my arm span- so I had to do that thing where you rest it on one foot and shuffle), dropped down the back seat, hefted it in, and….couldn’t shut the boot.  I moved the front chairs forward as far as they would go, and finally managed to wedge it in.

Thursday morning I got up half an hour early.  I drove to the station with my knees around my ears, tilted slightly over the steering wheel, got to the station and….it was stuck.  After much pulling from one angle and pushing from another I finally got it free, left it by the gates and went to park.  As people arrived for the train they gave me looks of pity.  Then they mostly laughed.

I got it on the train though.  It blocked most of the aisle and I spent a lot of time apologising to people, but at least I was part way there.  The problem was that in trying to get it on the train, I damaged one wrist quite a bit and I couldn’t work out how I’d get it through Charing Cross station and to the taxi rank.

Enter, David!   David (a complete stranger) overheard me telling a lady the story of the heavy box and took pity on me.  He was very lovely and helped me carry it from the train to a taxi.  Even with two people it involved quite a lot of huffing, puffing and ‘can we just put it down a second?’ s.  I’m embarrassed to admit that even with all this going on, the fact that he was helping me and being SO lovely about it impressed me so much, my focus on the box wandered to whether he was wearing a wedding ring (No idea – we were both in such weird contorted positions, I couldn’t even see his hands…).

David got me and box into a taxi: 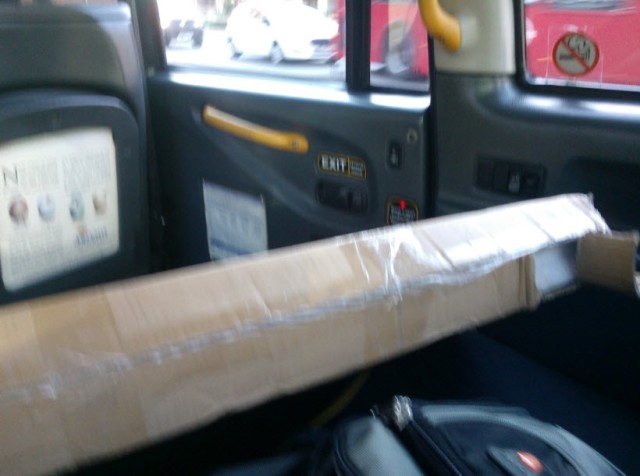 And the taxi got me to the office:

Faced with a flight of stairs before I reached the lift, I thanked my lucky stars that I always ‘Good Morning’ the cleaner.  He came to rescue me, got me to the lifts and hooray!

The 2 hour commute from hell was over.

I had a moment recently where I thought I might have finally grown up and become sensible.  That these sorts of things had stopped happening to me.  It appears not.

The morals of this story:

erm...
View all posts by thepogblog →
This entry was posted in Pog Life and tagged box, commute, Giant Connect 4, oops. Bookmark the permalink.

7 Responses to A commute with a box. A very big box.