The incident with no name

(and if you’re of a delicate disposition, don’t read before eating, after eating or if you ever intend to eat again)

Last Friday night I caught a movement on the corner of my eye while I was in the bathroom.  There was a mouse peering round the door at me.  Mousey and I then played a game of chase around my bedroom which I lost.  By Monday I’d established that Mousey was under the washing machine and put a humane mouse trap down ready to catch him.  Unfortunately, Norman also worked all this out and decided that this was a good place to spend his time. 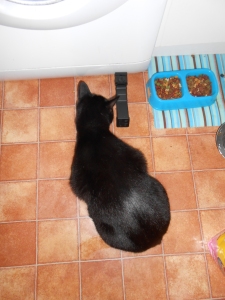 Yesterday, Sister Two and I were having a coffee on my patio, and Norman hurtled form the end of the garden with a mouse in his mouth.  A mouse which wasn’t quite dead.  It was beyond saving and I knew I should put it out of its misery but instead we left Norman to it.  I felt bad that I’d been such a coward, hoping I could do better given the same chance again.  It turns out you really do need to be careful what you wish for.

(Incidentally, we thought this might have been Mousey, but Norman spent a lot of yesterday evening inspecting the underside of the freezer so I moved the trap and hoped Norman was just wishing for a fish finger or two).

This morning I was lying in bed and heard a commotion in the lounge.  I assumed the worse for Mousey and rushed in.  It wasn’t Mousey that Norman had caught.  It was a collared dove.  A collared dove that wasn’t quite dead.  I turned into a coward again, threw a tea towel over it, rushed to the end of the back garden and threw it over the fence.  I felt bad again and hoovered up the feathers wishing I’d have done something kinder.  (When will I learn?!).  Ten minutes later the cat flap clattered and Norman came in with the same bird which was still alive.  We wrestled, I won and I took bird to the end of the garden.  I couldn’t leave it to suffer anymore so I looked around for something to kill it with.  It was between the stone cat that marks Lucifer’s grave (Lucifer being my previous cat rather than me being any sort of devil worshipper) and a six foot long lump of wood.  I went for the wood.  I wish I hadn’t.  It didn’t kill bird outright and after a few strikes with it, the wood started to split.  I had to finish what I started but I really, really hope no neighbours were looking out the window:  I was in my dressing gown and orange Crocks (gardening shoes, you understand) pounding the bird while apologising profusely to it, feathers and bits of wood flying everywhere.  I did it, but I did feel very, very sick.

It doesn’t end there though.  I disposed of Bird, sat down and heard a scratching sound.  It was Mousey.  I basically took apart the kitchen trying to find him, determined that neither  Norman nor I would kill again today.  I couldn’t find him anywhere. I started on my e-mails.  I heard more scratching.  I finally thought to look at the trap…it was shut.  It contained a live Mousey!  This time I gave the neighbours at the front of the house the treat of my dressing gown and orange shoes as I ran part way up the road and released Mousey to cries of ‘Run Mousey!  Run like the wind!’  (Ok, I didn’t actually shout that, but I did give him strict instructions which direction to aim for).

I still feel a bit sick but I’m hoping that setting one animal free unharmed makes up for the erm….other incident.

I think I may have to make Norman a coat of bells (he removes collars within 24 hours) to give the local wildlife a bit more of a chance…:o) 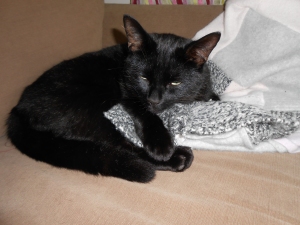 erm...
View all posts by thepogblog →
This entry was posted in Uncategorized and tagged Bird, Mousey, Norman, Sister 2. Bookmark the permalink.